World War II had a dramatic impact on the city of Amsterdam. Hundreds of healthy brave young Rug City men left their families and their jobs to fight for our country. That lost productivity and purchasing power was felt by every business and retail merchant in this town. We also lost the Rugmakers. The Canadian American League made the decision to suspend play for the balance of the War, after the 1942 season. Amsterdam summers suddenly became a lot quieter.

Following the Allied victory in 1945, the CanAm League resumed play in 1946. With all of the Amsterdam boys who survived the battles in North Africa, Europe and the Pacific safely back home, the restoration of a full schedule of baseball activity at Mohawk Mills Park must have been eagerly anticipated.  As a way to ensure every player returning from military service had the best shot to make the Majors, big league active rosters had been expanded by ten extra players. Since that meant a total of 160 of the very best minor league players would now spend the entire ’46 season in the Majors, the ripple effect forced the remaining farm teams to suck the best possible talent from the lower leagues upward. An indication of just how shallow the talent pool at the C-level of the minor leagues was that year was 40-year-old Amsterdam manager Solly Rufkin having to put himself in 73 games as a first baseman and outfielder.

Today’s Amsterdam Birthday Celebrant, Fred Wolff was a member of Amsterdam’s 1946 starting rotation and one of only two southpaws on that Rugmaker pitching staff. You didn’t need a scorecard to pick out Wolff because at 6’3″ tall and weighing 230 pounds, the Pennsylvania native was the biggest guy on the team, which of course explains why he was nicknamed “Tiny.” The Yankees had originally signed him right out of high school in 1943 and sent him to a D level Pony League affiliate they had back then in Wellsville, PA.

Wolff’s debut in professional ball had been a decent one. Despite a so-so, 6-6 won-loss record he posted an efficient ERA of 2.75. He then joined the Army and after becoming the heavyweight-boxing champ of Fort Lee, VA, he saw action in the Pacific. It took him a while to get discharged and by the time he made it to Amsterdam, the Ruggies’ season had already begun.

Wolff had a blazing fastball but the best he could do for Amsterdam during that ’46 season was another break-even record of 8-8. He wasn’t helped by the Rugmakers’ atrocious defense that year but his ERA of over four runs per game was not impressive either. The team, however, was able to win more than it lost, finishing in fourth place in the league standings and as a testament to how much Amsterdam welcomed them back, they led all Cana ball clubs in attendance.

Wolff actually made it all the way up to Triple A ball before his career ended in 1948. That fastball and his huge physical size made the Yanks think he could make it as a reliever. When he failed to do so, he returned to his native Pennsylvania, raised a family, taught kids how to play the trumpet and retired from Quaker Oats. He passed away in 2013 at the age of 87.

Former Amsterdam Recorder Sports Editor Johnny Page loved one-time Amsterdam Rugmaker center fielder George Liddy. He’d often mention the Brooklyn-born ballplayer in the first paragraph of his weekly columns, pointing out a particular strength of the outfielder’s game. “George Liddy can run like a deer.” “The way George Liddy dances around when he gets on base drives opposing pitchers nuts.”

Liddy was one of very few players who started for the Rugmakers in two different seasons. He played 89 games and batted .313 for the 1949 club and then returned in 1950 and started every game for Manager, Mayo Smith’s team and averaged .317. He was mostly a singles hitter who could steal second for you, score runs by the bushel and cover lots of ground in that spacious Mohawk Mills Park center field. The reasons he probably got stuck in C-level ball for two straight years were his lack of power and a poor performance during a 2-week trial in B-ball during that ’49 season.

Unfortunately, after his very impressive second go-round with Amsterdam in 1950, Uncle Sam called him into service and he spent the next two years in the military. When he returned to civilian life he had one more decent season in C-level ball and then decided to hang up the spikes. He returned to Brooklyn, got married and then moved south to Florida where he went to work for a radio station that he would eventually own. In addition to being a good ballplayer, Liddy played a mean game of tennis and it was his love of that game and his close relationship with tennis champion Chris Evert’s dad that gave him the idea to… 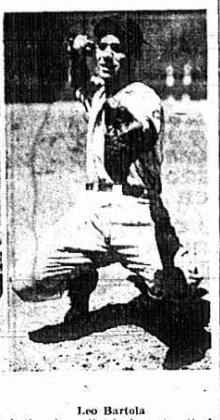 Unlike all the Yankee catching prospects that preceded him from the previous decade, New York City native Lou Bartola was actually looking as if he was in the right place at the right time. The “right place” was Amsterdam, New York in 1938, when Bartola was just 20 years old and about to begin his third year of play in the Yankee farm system as a catcher for the Amsterdam Rugmakers. It was the “right time” because Bill Dickey, the Yankee’s Hall-of-Fame-worthy catcher was turning 31 years old and about to begin his tenth season as the parent club’s starting receiver…

…Bartola’s performance in Amsterdam that summer made that scenario look a lot more likely. He topped the .300 mark in batting average for the third consecutive season but for the first time, he also exhibited some impressive power, by belting 13 home runs, including some 400 feet plus drives over the Mohawk Mills center field fence. Sure enough, when New York moved him up to B-level ball the following spring, club-officials told then-Recorder Sports Editor Jack Minnoch Bartola was being groomed to replace Dickey. And then…

Back in the 1950’s and ’60’s, long before the days of Cal Ripken and Derek Jeter, Major League shortstops were not expected to hit but they had to have great range in the field, strong arms and a vacuum cleaner for a glove. When the Yankees signed Jimmy Ludtka in 1950, it was said the 18-year-old Buffalo native had all three. That’s why Amsterdam baseball fans were excited to hear that today’s Amsterdam Birthday Celebrant was headed to the Rugmakers for his first stop on what was hoped would be a quick climb to the big leagues, maybe even as Phil Rizzuto’s successor as Yankee shortstop some day. 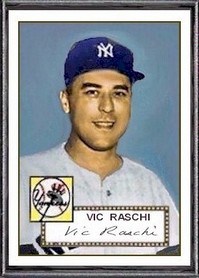 He was the very best Yankee to ever play for their Class C Canadian American League affiliate here in Amsterdam. In fact, between 1948 and 1953, Vic Raschi would be considered by many to be the best right-handed starting pitcher in all of baseball. On his Major League resume, he had put together three straight 21-win seasons and helped the Bronx Bombers capture a record five straight World Series  trophies.But back in the spring and summer of 1941, he was a shy 22-year-old member of the Rugmaker roster pitching in his first ever season of professional baseball. His full name was Victor John Angelo Raschi and he had been born to Italian immigrant parents on this date in 1918. As a high schooler, his blazing fastball had earned him a scholarship to the College of William & Mary, where he caught the attention of Yankee scouts who signed him and sent him to Amsterdam.

You can read the rest of my story about this former Amsterdam Rugmaker and NY Yankee pitching great in my new book “A Year’s Worth of Amsterdam Birthdays.” To order your copy, click here.

Trying something different this morning. Plus I really need help finding birthdays for some of the women who should be being featured on this blog:

Happy Birthday Bill Kennedy – After getting signed by the Yankees out of high school in 1939, this Georgia-Born southpaw put together a pretty good first season pitching for a Yankee D-League team in Ashland Kentucky. Then, for the first time in his life, he headed north of the Mason-Dixon line and landed right here in Amsterdam, NY…

Happy Birthday Dick Hartig – He was part of the heart and soul of Amsterdam’s Rockton neighborhood for a lot of years….

Happy Birthday Ron Barone – This controversial Amsterdam original has been a friend of mine for forty years….

You can read the rest of my stories about these three gentlemen with ties to Amsterdam in my new book “A Year’s Worth of Amsterdam Birthdays.” To order your copy, click here.

Bob Grim was just one of two Amsterdam Rugmaker pitchers who would go on to enjoy 20-victory seasons with the New York Yankees. In fact Grim pitched his way into the history books, by becoming the only Yankee to put together a 20-win season in his rookie year, which was 1954.

But if you had asked Grim’s 1949 Rugmaker manager, Mayo Smith, if his then-19-year-old, Brooklyn-born right-hander would become a 20-game-winner in the big leagues some day, you wouldn’t have blamed the popular skipper for looking at you sort of funny. After all…

You can read the rest of my story about this former Amsterdam Rugmaker and NY Yankee in my new book “A Year’s Worth of Amsterdam Birthdays.” To order your copy, click here.

1951 was not a good year for Amsterdam sports fans. It marked not only the end of the Amsterdam Rugmakers as a New York Yankee farm team but also the dissolution of the Canadian American (Can-Am) League the team competed in. Amsterdam finished in third place that farewell season, with a 62-56 record. They had the best hitting lineup in the Can-Am circuit that year, scoring 114 more runs than any other team. Their achilles heel was pitching. Rugmaker hurlers surrendered more runs per game (6.48) than any staff in the league but you couldn’t blame today’s Amsterdam Birthday Blog celebrant for that.

Louie Paz was a Queens, NY-born left-hander who led that last Rugmaker team with a 3.93 ERA while compiling a very productive 10-5 won-loss record. Those numbers impressed the Yankee organization and they were ready to bring Paz up another level in their well-stocked and heavily talented farm system. The 20-year-old southpaw however, would never again pitch in a professional ball game…

You can read the rest of this story of this former Amsterdam Rugmaker in my new book “A Year’s Worth of Amsterdam Birthdays.” To order your copy, click here.

All rights reserved. No post or part of a post in this blog may be reproduced or transmitted in any form or by any means, electronic or mechanical, including photo copy, recording or any information storage and retrieval system, without permission in writing from the author.