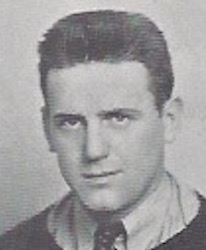 There were three Amsterdam Dargush brothers and each of them made their marks as talented schoolboy athletes at Amsterdam High School during the mid-to-late 1930’s. Benny was the oldest and after a stellar career in basketball at AHS he went to Michigan State and actually started at center for the Spartans as a sophomore. Vinnie was the second oldest of the brothers and the most athletic among them, having once been voted the top Amsterdam High School athlete. Youngest brother Anthony “Tony” Dargush played both basketball and football for the Purple & Gold, graduating in 1938. Like his brothers, he was a big broad six-footer who was an excellent lineman on the gridiron and extremely tough under the boards on the hardwood.

Tony was born in Amsterdam on August 15, 1921 along with his twin sister Ann. Their parents were Lithuanian immigrants who lived on John Street. In addition to his twin, Tony had two other sisters. He was the last of the three Dargush boys to go into the service.

Brother Ben had completed the ROTC program at Michigan State and was commissioned a second lieutenant when he entered in April of 1940. Vince Dargush had gone to Cobleskill Agricultural College after high school where he had captained that school’s basketball team for a year before enlisting in the US Army in September of 1941. He started out assigned to the Infantry but got reassigned to a Tank Destroyer unit and during training in Arkansas was promoted to sergeant. He then got selected as a candidate for Officer’s Training School, which he successfully completed. He was commissioned a second lieutenant and sent overseas in May of 1943.

Just one month earlier, Tony had been inducted into the Army and by September of 1943, he was shipped out to North Africa. In October of that same year he became part of the Allied force invading Italy, where he was wounded in battle and spent three months recovering in a military hospital. Fortunately, while in Italy Vince and Tony Dargush were stationed near each other and had the opportunity to get together frequently. As soon as Tony recovered from his wounds he was sent back into action just in time to be part of the invasion force of southern France in June. It was during a break in the fighting that Vince riding in a vehicle in the French countryside saw his older brother Tony sitting on the side of the road. It was the last time the two brothers would ever get the chance to talk.

They were not the only members of their family to be in France at that point. Their brother-in-law, Amsterdam native Peter Urban, who had married Tony’s twin sister Ann in November of 1942, was a member of the parachute force that jumped into the French countryside as part of the D-Day invasion in June of 1944. Within the next three months three telegrams would arrive at the Dargush’s John Street home carrying news that would have an impact on their family forever.

In August of 1944, the first telegram from the War Department arrived at the Dargush’s John Street home with the horrible news that Peter Urban, husband of  Tony’s twin sister Ann, had been killed in action. The following month two more War Department telegrams arrived almost simultaneously. The first informed Mary Dargush that her son Anthony had also been killed in action in France on August 18. The second informed the already grief stricken mother that her son Vincent had been injured in action. Fortunately Vince would recover from his wounds.

No Amsterdam family sacrificed more for their country during World War II than the Dargush clan did. We owe them an eternal debt of gratitude.

Tony Dargush was not the only Amsterdam-born war hero with an August 15th Birthday. Here’s a story about another one.