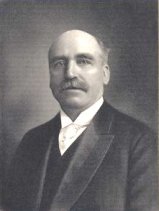 Samuel Wallin was one of the most significant and accomplished citizens in the history of Amsterdam, NY. He was born on July 31, 1856 in the city of Easton, Pennsylvania. His father was a native of England who had been trained in carpet manufacturing, which explains how he and his family ended up in Amsterdam, NY, working in the Sanford carpet mills by 1864.

As a youngster, Samuel attended Amsterdam Academy but while still a boy, he got himself an entry level job in the Sanford mills, earning fifty cents a day. He fell in love with the place and the rug-making process and he would remain involved with it the rest of his life.

Because he had started so young and at the very bottom rung of Sanford’s  corporate ladder, he held just about every job possible on his climb up it. By the time he was thirty in 1886, he was ready to form a rug making company of his own. Well not exactly his own. Three of his coworkers at Sanford were ready to take the leap with him and each of the four possessed knowledge of a different area of the business.

David Crouse was a dyer. John Howgate’s specialty was the finishing room. William McCleary’s expertise was the drum room and Wallin himself was a designer. The four didn’t have much money between them but they managed to scrape together just enough cash to start the firm, McCleary, Wallin and Howgate in a small factory next to the Mohawk River on Amsterdam’s South Side. Their goal was to specialize in narrow runner rugs, no wider than 30 inches in length. The company started with nine employees and struggled mightily before turning the corner to profitability. When Howgate died in 1902, the firm’s name was changed to McCleary Wallin and Crouse. After fire destroyed their small South Side factory, they relocated to Amsterdam’s Rockton area and began expanding their product line and their operations. By the time WWI began, the company’s payroll had reached 2,000 employees.

While being one of the masterminds behind this amazing growth, Wallin became deeply involved in all aspects of life in Amsterdam. A staunch Republican, he served as an Amsterdam alderman and was elected Mayor of the city in 1900, serving a two-year term. It was during his administration that the Rockton area was formally annexed into the city. He later ran for Congress in 1914 and won a two-year term, choosing not to seek reelection in 1916.

He joined Amsterdam’s First Methodist Episcopal Church, when he was just 15 years old and became a pillar of that congregation. After achieving career success Wallin told his Pastor that whenever he came across a family in Amsterdam in need of money for food, clothing or shelter to provide it and send him the bill. As one might expect, Wallin was on the Boards of several local banks and organizations. His marriage to the former Margaret Faulds of Amsterdam was solid and long lasting. Though their coupling produced no children, they adopted a son and took in a niece of Mrs. Wallin who was treated like a daughter.

Just after completing his term in Congress in 1916, Wallin began experiencing dizzy spells and headaches. By August of the following year, they had become more serious. He went to New York City to consult with some of the very best neurological specialists in the World who told Wallin there was nothing they could do. He returned to his home at 163 Locust Avenue to spend his final days. The end came there on the evening of December 1, 1917. He left the bulk of his estate to his wife and in 1920, McCleary Wallin & Crouse merged with the Shuttleworth Brothers Company to form Mohawk Carpet Mills, Inc.