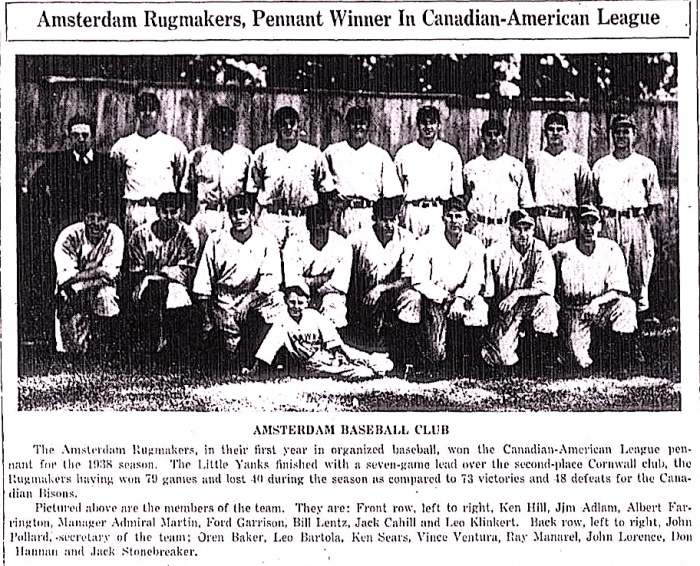 The first-ever Amsterdam Rugmaker team took the field at Mohawk Mills Park in 1938. They were managed by “Pepper” Martin. Not the “Wild Horse of the Osage” Pepper Martin from those great St. Louis Cardinal Gashouse Gang teams of the thirties. This was Admiral “Pepper” Martin, a career minor leaguer who became a player-manager in his thirties.

His 1938 Rugmaker team ran away with that year’s Can Am League regular season pennant on the strength of a superb starting rotation that included today’s Amsterdam Birthday Celebrant, a big right hander from out near Rochester, NY named Ray Manarel. Born on July 13, 1915, he had been a baseball and basketball star in high school. The Yankees signed him a first time in 1936, while he was pitching for Brockport State Teachers College but Manarel asked for a release from his contract so he could accept an athletic scholarship to attend Clark University in Massachusetts.

After graduating from Clark, Manarel was convinced to give minor league ball a shot and he signed with the Sydney Mines, a Canadian team in the just formed six-team D-level Cape Breton-Colliery League. He had a sensational first season, going 9-3 with a microscopic ERA of 1.45. That earned him a new contract from the Yankees and promotion to Amsterdam.

That 1938 Rugmaker team went 79-40. Manarel was a huge reason why. He went 15-5 as part of the best starting rotation in the league that also included Duke Farrington (17-5) John Cahill (17-9) and Orin Baker (15-4). Manarel also often helped his own cause with his strong hitting. He averaged .294 for the Rugmakers that year, and belted 2 home runs.

The consensus of the entire Yankee organization was that Manarel was headed to an outstanding big league career with the parent club. Unfortunately, after compiling a 24-7 record during his first two seasons of professional ball, he suffered an arm injury and never again appeared in another game. Instead he became a history teacher in Massachusetts, served in the Navy during WWII and then became a professional management trainer for General Motors in Bristol, CT. He also served as a Yankee scout in the New England area for a number of years. He and his wife Virginia had two daughters and two sons, one of who, Charles, was killed in action during the Vietnam war. Manarel died in 2002 at the age of 86.