If you lived in Amsterdam, NY during the 1950’s, ’60’s or ’70’s and remember shopping in the city’s downtown, there were two great clothing stores that should stick out in your mind. If you were a man or teen age boy it was Mortan’s and if you were a woman or young lady, Holzheimer & Shaul was “the” place to shop. The folks who ran these two businesses just seemed to work harder at everything. They always carried the latest styles, they offered the biggest variety, they had great promotions and each store always looked absolutely fantastic inside and out.

Today’s Amsterdam Birthday Celebrant, Sam Fox was the merchandising wizard behind the longtime success of Holzheimer & Shaul. He was born in Rhode Island in 1914 to a German Jewish family and graduated from Bryant College planning to become a Certified Public Accountant. The problem with that career goal was that at the time, America was in the midst of the Great Depression and hiring accountants was not a top priority of struggling companies. So instead, Sam went into the family business of retailing, first going to work for his Uncle, who owned a department store in Elmira, NY. Then, after serving in the Navy during World War II, Sam came to Amsterdam. 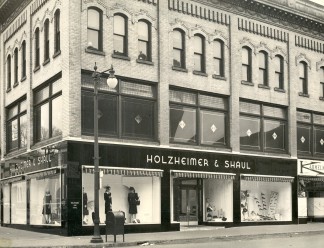 Sam’s Grandfather had started a department store in Amsterdam back in the 1860’s called S. Levi and Sons. It was a large store located on the south side of East Main Street and it sold menswear, womenswear, furniture, china, cosmetics and even had a full service beauty salon on site. Sam’s Uncle eventually purchased the store from his grandfather, moved it to its iconic location at the northeast corner of East Main and Church Streets and renamed it Holzheimer & Shaul.

The store began catering exclusively to women and became one of the most successful retail establishments in the history of the Rug City. Sam’s promotional instincts and his ability to recognize what female customers wanted were keys to the store’s success. It was Fox who came up with Old Fashion Bargain Days, Farmers’ Markets and Fashion Shows as promotional events and each caused significant increased traffic to downtown. After managing the store for his Uncle for many years, Sam purchased it outright in 1968.

When the first phase of the Mall opened in 1977, Sam made Holzheimer’s one of its anchors. At first, the store thrived in its new location but by the time Sam retired in 1987 and closed his beloved business, it was pretty clear the Mall was not going to be the long-term savior of retail in downtown Amsterdam.

In addition to running one of Amsterdam’s most popular shopping spots, Sam became deeply involved in the community via the Boy Scouts, Kiwanis, the Chamber of Commerce the Masons, and his beloved Temple if Israel Synagogue. There were few local charities he did not support and few local people who did not know him. He and his wife Maxine had two children, a daughter Amy and a son Alan. Sam died on September 4, 2001.