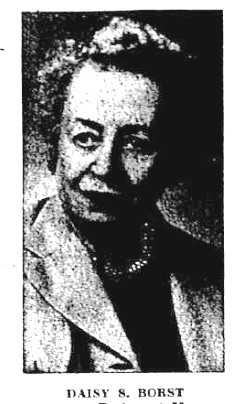 Daisy Snook was born in Amsterdam, NY on May 7, 1886. Her dad was a member of the same Snook family for whom the Snooks Corners hamlet in the town of Florida and Snooks Corners Rd. are both named. Her Mom was a Fairbanks, whose family’s roots in America dated all the way back to 1633. Daisy broke the mold for what it meant to be a female in the early twentieth century when she became the first woman ever admitted to Albany Law School. As if that wasn’t enough, she also graduated at the very top of her class in 1912. When she passed the New York State Bar, she became the first Montgomery County-born female lawyer in history.

One year after that graduation, Daisy was working as the personal stenographer and clerk for former Montgomery County Court Judge Henry Borst, who had also served as the County’s District Attorney and who at the time, was one of the most influential members of this area’s legal community. Borst had just become the first Democrat to serve as Supreme Court Justice of New York State’s Fourth Judicial District, when then Governor William Sulzer appointed him to the vacant post. Two year’s later in 1915, he won a 12-year-term to that seat outright, with Daisy evidently serving an instrumental role in his successful campaign.

Her relationship with Borst then became more involved because on December 10, 1919, the two were married. She was 33 years old and he was 64. It was Borst’s second marriage. I’m not sure if he divorced his first wife because of his infatuation with Daisy or if he had been widowed, but I do know he had four children at the time he married Snook and none of them were referenced as stepchildren in Daisy’s own obituary years later. Borst would die suddenly on Thanksgiving Day in 1925, after suffering a heart attack at a dinner for an Amsterdam priest, at which Daisy was also present.

She went into private practice with Amsterdam attorney James Ferguson, becoming the first practicing female lawyer in the history of the Rug City. Make no mistake about it, Daisy’s gender made her professional life difficult in a judicial system dominated by men. In fact, often times Daisy would sign her briefs, “D.S. Borst” in an effort to disguise her sex. But she was a tough individual who could hold her own against her male counterparts in any venue. Their respect for her was apparent when she became the first female president of the Montgomery County Bar Association in 1950.

Mrs. Borst served on several local boards and remained very active in the Democratic Party at the state, county and city levels. Like her husband, Daisy would also die suddenly from a heart attack, which she suffered in her home at 6 Grove Street in Amsterdam on January 15, 1957. She was 70 years old and at the time of her death she remained the only practicing female attorney in all of Montgomery county.

Daisy shares her birthday with this gallant World War II soldier from Amsterdam’s South Side.