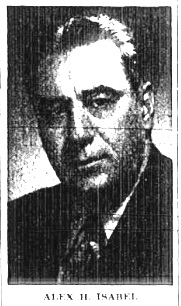 One of our favorite nighttime snacks growing up was $1.00 worth of french fries from Isabel’s Restaurant. Back in the early 1960’s, that bought enough of those delicious, freshly-cut, deep-fried spuds to feed a front porch full of people and being the youngest in my family, I was usually the one sent down the half-block to Isabel’s West Main Street location to pick them up. I didn’t mind that assignment at all because it meant I could once again examine every square inch of Danny Haver’s wonderfully sketched mural tribute to Alex Isabel that used to hang on the bar side wall of the popular Amsterdam eatery.

Alex Isabel was the World War I era Michael Jordan of Amsterdam’s West End neighborhood. Born in New York City in 1899, he moved here with his parents when he was six years old. He evolved into one of the best athletes in the city, He became a star baseball player at Amsterdam High School before dropping out to enlist in the US Navy during WWI and serving on a battleship. When he came home from service, he finished his high school education at St. Mary’s Institute, where he became a star basketball player.

After graduating from St Mary’s, he played both semi-pro basketball and baseball for a number of area teams for a number of years. He was a pitcher in baseball and he also became a highly respected manager of several area ball clubs. He would often take teams of local players to state and national tournaments. It was in these roles that Isabel developed an incredible knowledge of baseball talent in the northeastern United States. He was such a respected authority that he was elected president of the American Amateur Baseball Association in 1947 and was also hired as a scout by the Brooklyn Dodgers. One of my favorite depictions on Haver’s barroom mural was his colored caricature of the Brooklyn Dodger pitcher Johnny Podres. Alex had signed the upstate New York southpaw to a Dodger contract and Podres’ two complete game victories had enabled Brooklyn to finally defeat the Yankees in a World Series in 1955.

Isabel’s career as a scholastic coach had begun in 1940, when he became head coach of St. Mary’s Institute’s Varsity Baseball team. The following year he added SMI’s Varsity basketball coach’s position to his resume. In 1944 he became Amsterdam’s acting recreation commissioner. By 1946, he had received a permanent appointment to the job. Under his direction, this City’s recreation programs expanded and flourished. He opened new facilities and initiated a robust summer parks program, even bringing in AHS Drama Teacher Bert DeRose to begin the very popular summer plays.

In addition to his baseball work at the pro, semi-pro and high school levels, Isabel was also a key driving force in getting Little League baseball going strong in Amsterdam. His motto as the city’s recreation commissioner was “There’s nothing too good for the kids,” and he proved that when it came to his dedication and effort on behalf of the Rug City’s youngest ballplayers. He served as commissioner of the Little League for many years and one of his most ambitious goals was realized when the ribbon was cut opening a ballpark just for that organization’s games at the old Coessen’s Park, on the East End of the city. When it opened in 1952, it was considered one of the premier Little League facilities in the entire state.

His sudden, unexpected death from a heart attack in January of 1953 shocked the entire city and devastated his native West End. Alex Isabel was the man who defined what a good city recreation program should be and then built one for this community. Every one of us who remembers summers jam packed with great things for kids to do can thank this man for making those memories possible. He was just 53 when he died, leaving behind his wife Ann and two sons. Isabel’s Field at the top of Locust Avenue was named in his honor.