The Recorder has pretty much been Amsterdam, New York’s number 1 newspaper since before the city became a city. Over the years staff members of that publication have become some of Amsterdam’s most prominent, celebrated, important and often controversial personalities. In this new list I identify ten Recorder employees who served critical rolls in keeping our community informed, engaged and entertained over the years. The complete list of ten will be included in the next edition of my  Amsterdam Top Ten Newsletter. Anyone who purchases a copy of my new book Fifty Amsterdam, NY Top Ten Lists will receive any and all of the new Lists I put together during the next 12 months. Everyone else will have access to the portions of these new lists I post here at my Amsterdam blog. Here’s a preview of my brand new

Jack Minnoch – One of the great side benefits I received while researching eighty years worth of Amsterdam Evening Recorder issues as references for my Amsterdam Birthday and Top Ten writing efforts was becoming familiar with the work of this outstanding former sports editor. Unlike most of his successors to that position, Minnoch himself had been a talented athlete in his younger days as both a competitive runner and amateur boxer. That gave him the “I’ve been in their shoes” perspective he needed to get inside the minds of the Amsterdam based sports personalities he wrote about. But having been there was only part of his secret. Minnoch was also both a wordsmith and a wonderful communicator, who had the ability to go beyond the who, what, where, when and why requirements of sports journalism to inspire his Amsterdam readers to support their hometown teams and athletes. It was Minnoch who covered the first half of the historic run of the NY Yankee’s Amsterdam Rugmakers farm team. It was Minnoch who described the brave exploits of the young men responsible for the glory days of Amsterdam boxing. It was Minnoch who helped Jack Tracy create the foundation of Amsterdam High School’s interscholastic sports legacy. He left the paper and Amsterdam in 1942 to become sports editor of the Jamestown News Journal and eventually a nationally know speaker and humorist. 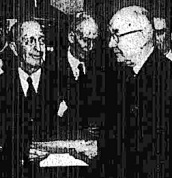 William “Bill” Maroney – devoted his life to the Recorder. He worked his way up to the city editor’s position from a reporter’s desk and along the way he was credited with building the paper’s very first sports section. During his stellar 55-year career there, he became known and loved for his calmness under pressure of deadlines, his photographic memory and the kind-hearted and professional way he treated the folks who worked under him. He is shown here on the right receiving congratulations from then Recorder senior publisher, Gardiner Kline on his retirement from the Paper in 1953. When he passed in 1957 an entire appreciative city mourned. Maroney’s son John would one day become sports editor of the Recorder.

Stan Silvernail – This guy came to the Recorder from Mount Upton, NY in July of 1941 by way of Syracuse University, where he was a Phi Beta Kappa graduate of their school of journalism. Just a few months after he got to Amsterdam, the Japanese attacked Pearl Harbor and Silvernail enlisted in the Army Air Corps, and saw service in Europe and Africa. He got back to his Recorder desk in 1946 and finally began a career that would see him evolve into one of the most respected and dignified executives in the Newspaper’s history. Called back into service when the Korean conflict broke out, when he again returned to work in 1953 he was named city editor, succeeding the late William Maroney. He oversaw the Recorder coverage of historic events both national and local in scope such as the rug industry’s exodus from the city, the Vietnam War and the horrific assassinations of the 1960s. It was his writing that established the Paper’s official positions on the issues of the day. Stan became the recorder’s managing editor in 1970 and held that position until he retired. A proud dad of two boys, Stan was active in both scouting and youth sports organizations for many years. I bowled with Stan in the Men’s Commercial League and got to know him well. He was the definition of a class act and a true gentleman. 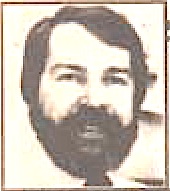 Tony Benjamin – Vietnam and Watergate forever changed the way journalists were educated and did their jobs. Aggressiveness became a much more in-demand trait in the newsroom as editors expected their reporters to sharpen shovels along with their pencils so they could dig deeper into each story. When Tony Benjamin became the executive editor of the Recorder in the 1980’s, he brought a bunch of sharpened shovels with him and his reporters made good use of them. Night after night it seemed as if readers learned more details of actual or potential local controversies and scandals. AIDA might be the target one night and the Montgomery County Economic Development Agency the next. How did the thruway bridge collapse? Was the GASD Board discriminating against Hispanics? Who was behind the Mohasco  fire? Remember the murder trial involving Stanley Lees? Benjamin and his bunch went after them all until he and his top reporter, Teresa Cuda were fired. The reasons for the dismissal were different depending upon who you asked but one thing is for sure, the Recorder shovels grew duller after his departure.

The remaining six members of my list include two memorable former sports editors, the paper’s all-time most popular featured columnist, a descendant of a US President, a personality plus publisher and an outstanding photo journalist.

Who did not make my list are any women! Not that there haven’t been several talented female journalists who did excellent work there. Cuda was an example of one of them. Amsterdam native Diane Tuman did a great job covering the local sports scene after graduating from college in the late 1970’s. And more recently, I always paid attention to anything Jessica Mahar got into print. But researching the newspaper’s history for this list has led me to the conclusion that the Recorder has been up until now a male-dominated company. That’s what makes it very nice to see that Emily Hinkle and Nicole Antonucci serve as the current editors of the Newspaper! 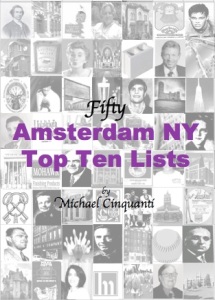 Remember, if you’ve purchased a copy of my new book; Fifty Amsterdam, NY Top Ten Lists, I will be e-mailing you a copy of this complete list within the next week. If you’d like to order a copy of the book so you can also receive all the additional bonus lists I’ll be distributing during the next 12 months, you can order your copy here.

I already have the e-mail addresses of all the folks who purchased the book online or directly from me. If you purchased your copy from Liberty Fresh Market or the Book Hound, please e-mail me (cinquantim@genium.com ) with your e-mail address so I can send you the new Top Ten lists I continue to compile.