Throughout Amsterdam’s history, fraternal and volunteer service organizations have contributed greatly to the fabric and spirit of our community and fortunately for all of us, many still do. In today’s post, I write about six such organizations. I’ll include five more (there was a tie for one of the slots making this a top 11 list) in my upcoming book of Fifty All-Time Top Ten Amsterdam Lists:

Amsterdam’s Elks Lodge 101 was organized in 1888 at the long ago demolished Red Men’s Hall, which used to be located on East Main Street. Their mission statement was summed up into four tenants; Justice, Charity, Brotherly Love and Fidelity. It wasn’t until 1909, when membership in the local lodge had exceeded the 500 mark that the local chapter had enough money in its treasury to afford their own clubhouse and the one they built on lower Division Street, alongside the Amsterdam Savings Bank was indeed one of the finest fraternal organization homes in the history of the Rug City. The early charity of the lodge focused on the unfortunate and underprivileged of the community and for years, their trademark philanthropic effort was the distribution of Christmas baskets to Amsterdam’s neediest families. Many of Amsterdam’s leading male citizens joined the organization over the years. Well-known local names like former School Superintendent Raphael J. McNulty and Mohawk Finishing founder Frank Pabis took on the title of Exalted Ruler. Urban renewal took the lodge’s regal clubhouse in the 1970’s. The organization is still going strong today, thanks to the efforts of familiar names like Fran and Jackie Sikorski, Rich Boice, Cliff Gillis, Vic Sperduto and a host of others. They are now lodged in the former St. John’s Club Social Center on Fourth Avenue in Amsterdam. Their much appreciated community good will and charity efforts go on. They continue to visit the needy and the sick among us, took over sponsorship of Amsterdam’s Halloween parade from the Kiwanians in 2004, and donate teaching tools about the U.S. Constitution to local schools. In 2013, the Amsterdam Elks Lodge No. 101 celebrated their 125th anniversary. 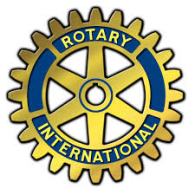 Amsterdam Rotary Club: The very first Rotary Club was started in Chicago in 1906, as a cure for loneliness in a big city. Four businessmen got together and decided they would continue meeting every week, rotating the sight to each of their offices, hence the name Rotary. Fourteen years later a group of prominent Amsterdamians replicated that Chicago get together in the dining room of Amsterdam’s Barne’s Hotel on Market Street. These Rug City businessmen weren’t lonely but they loved the idea of getting together regularly to brainstorm about business and do good things for their city. Fast forward 98 years and those regular Rotary luncheons are still going on here in Amsterdam up at Raindancer Restaurant but now women members are welcome too. During their almost century of existence, Amsterdam’s Rotary Club has done so many good things for this community I could fill several pages of this book trying to describe them all, from sponsoring Amsterdam’s first farmers market on a vacant lot on Railroad Street in 1919, to creating a college loan fund for Amsterdam students who wanted to further their education; from establishing the Amsterdam Community Chest which evolved into the United Way to planting 28,000 tulip bulbs imported from Amsterdam, Holland in 1969. Their fish fries and summer variety shows have become favorite Amsterdam traditions. What an outstanding organization the Rotarians have been for this community.

Lions Club – The Amsterdam chapter of the Lions Club was formed in 1951. The first president of the local chapter was Robert Young. The mission of the Lions Club is to empower volunteers to serve their communities, meet humanitarian needs, encourage peace and promote international understanding. In the 1920’s the international organization took on the cause of eradicating blindness and providing whatever aid was possible to the blind and vision impaired. Amsterdam’s Lions Club members took this to heart. They led the local effort to garner eye donations for corneal transplants and then organized a delivery system to get those donations to their recipients in the prescribed amount of time. They donated books printed in braille and extra large print along with audio books to the Amsterdam Library. They sold record amounts of Blind Seals to help pay for their programs. They collected old eyeglasses, refurbished and redistributed them to the neediest of the sight impaired. More recently, the Lions have initiated a similar support and assist initiative for the hearing impaired and victims of natural disasters. And as of the summer of 2017, the Amsterdam Lions Club is still going strong. They meet twice a month on Thursdays at Bosco’s Restaurant on Amsterdam’s Division Street.

Century Club – Women in America had not yet been given the right to vote when an Amsterdamian named Mercy Annie Allen Trapnell gathered 25 of her lady friends together to talk about the plays of William Shakespeare and the poetry of Elizabeth Barrett Browning. Trapnell then suggested each attendee invite three of their friends to a subsequent get together. Now since the majority of these ladies came from the upper portion of Amsterdam’s late 19th Century Society, the task of finding three friends to attend their next gathering was not a particularly challenging one and sure enough a total of 100 women showed up at the next meeting. That’s when the decision was made to formalize the group into a club that would be dedicated to providing members with exposure to culture, knowledge and self-improvement. Since there were 100 ladies in attendance, they named their new organization the Century Club and initially limited membership to 100. By 1908 the cap had been raised to 250 and after another 25 years of nomadic gathering around town, ground was broke on what would become one of the most elegant clubhouses ever constructed in the city of Amsterdam, on Guy Park Avenue. During the subsequent decades the members of the Century Club have accomplished some great things for this community, among them the establishment of the free milk program to the kindergarteners in Amsterdam’s schools and the development of the Sassafras Bird Sanctuary. In addition, their beautiful clubhouse has hosted a multitude of community events and activities of which the annual Festival of Trees during the Holiday season is a classic example.

Historic Amsterdam League – One of the newest service organizations in our community, the League was established in 2010, in conjunction with the celebration of the 125th anniversary of the 1885 chartering of the City of Amsterdam. HAL’s official mission is to preserve, promote and protect the physical, cultural and natural heritage of the city. Based on the success of HAL’s program initiatives during the first seven years of their existence, this organization has absolutely nailed that mission. Led by a group of intelligent and enterprising lovers of Amsterdam heritage, HAL has pulled the dusty covers of time and lack of attention off of some of this community’s most treasured history. Using wonderfully creative reenactment tours and commemorative books, the organization shines bright lights on the remnants of places, people and things that still exist in every section of our city and tells us their stories. They spend time, money and effort to seek official recognition and legal preservation status for some of Amsterdam’s most valuable historical artifacts and also work hard to restore them. HAL’s members are people who truly understand that learning the lessons of the past is the key to charting a more successful future plus they have a heck of a good time teaching us all these amazing things.

Knights of Columbus – This fraternal order began in Connecticut in 1882. Fifteen years later, Amsterdam Council 209 was formed by several of the male members of St. Mary’s Church. The local chapter grew quickly aided by the dramatic growth in Amsterdam’s Roman Catholic population during the pre-WWI years. Called Knights because they took vows to defend the Roman Catholic faith, members were also expected to promote the values of charity, unity, fraternity, and patriotism in the world. Those of us who served as altar boys in Amsterdam’s Catholic churches in the 1960’s, 70’s and 80’s remember fondly the many times the Knights who reached the fourth degree level of membership would march in processions during special mass celebrations at our respective churches. Carrying swords and dressed in feathered hats and capes, they were an impressive and appreciated sight. Though their clubhouse on Market Street was not as old-world elegant as the nearby Elks Lodge, it was one of the finest and most functional venues in town for special events and epic Bingo nights. The Amsterdam K of C did a whole lot of good for this community as well. The Knights made huge contributions to the construction funds of both Bishop Scully High School and St. Mary’s Hospital. They donated truckloads of modern hospital beds and special convalescent chairs to both St. Mary’s and the Mt. Loretto Nursing Home. They sponsored youth sports teams for many years and consistently did whatever was asked of them on behalf of Amsterdam’s elderly and our special needs population. Like most organizations in this depressed old mill town, as jobs and young people disappeared the membership numbers of the Knights suffered. But it still continues. Thanks in large part to the efforts of Jeff Stark and a bunch of guys who had fathers in the organization, the Knights of Amsterdam are making a comeback. They have a new down-sized clubhouse on West Main Street and have begun a new tradition by sponsoring an old-fashioned street festival in that neighborhood every August to celebrate the Feast of the Assumption. I wish them every success.