1. Recreation Softball: If you’re my age and you’ve lived in Amsterdam all your lives, not only did you probably play in the city of Amsterdam’s recreation softball league but your dad and perhaps even your mom did too. So did your sons and daughters and right about now you have grandkids old enough to take their own swings at that stitched and spongy grapefruit sized sphere. And though the generations were different, the game has remained pretty much the same. No taking a lead when on base, ten players to a side thanks to a “short-fielder” who really doesn’t have to be short and of course the two “pitcher” rules. During the game, the “pitcher” has to throw the ball underhanded and then after the game, all team members must gather in a common spot where beer is served, preferably in “pitchers!” Three people I think of when the subject of Amsterdam Recreation Softball comes up are: Marty Tambasco, who is approaching his 50th year as a player and no-one has contributed more time, friendship or enthusiasm to the game; Tom “Flick” Flint who started out as a catcher with DePalma’s in the 1970’s and was still one of this town’s best pitchers when his terminal cancer struck in 2010. The annual tournament he started for his dad remains one of this city’s premier softball events; Jorge Rivera was the guy most responsible for bringing Amsterdam’s Latino population into the recreation softball community. He was one of the nicest guys I’ve ever met in my entire life. As for all-time most willing softball team sponsors, the former West Main Street bar known as Liber’s certainly deserved a vote of thanks for sponsoring so many different softball teams for so many years. Below is one of my favorite all-time Recorder photos showing the ladies softball team sponsored by J.J. Newberry’s Department Store in 1947.

2. Recreation Basketball: A much older recreation sport than softball, Amsterdamians have been playing basketball in city recreation leagues since the World War I era. Back before television took over as the main source of after-dinner entertainment, Amsterdam sports fans could head down to Theodore Roosevelt Junior High School’s huge gym on winter evenings or go across the bridge to the Armory’s and watch some of this city’s all-time greatest hoopsters go head to head against each other. Through the 1950’s the teams were mostly neighborhood and ethnically bundled and sometimes a mixture of both. For example, the pre-WWII American Lithuanian Club (ALC) had a super hardwood team for years and drew their rosters from Amsterdam’s burgeoning Lithuanian community, which centered itself around East End neighborhood of the old St. Casmir’s Church. St. John’s Club was where the Polish American athletes from Park Hill played their ball and the Mohawk Athletic Club represented Amsterdam’s Italian dominated West End. None of these teams were beyond recruiting from outside those lines to strengthen their league title chances. By the 1960’s the grills and retail businesses of Amsterdam began to dominate team sponsorships, recognizing that a headline like “Mortan’s Win’s Championship” on the Recorder sports pages was worth its weight in advertising and public relations gold. The picture below shows Mortan’s 1965 city championship team. 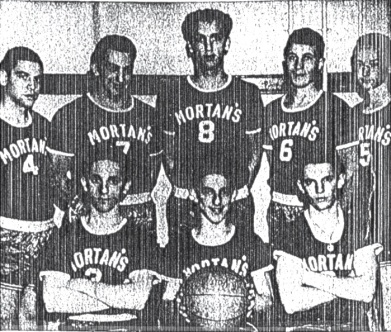 3. Over 30 Basketball: The biggest advantage softball has over basketball is that you can still play it competitively in your middle age years. Heck, I still remember when the late great Stan Burza drove a towering smash over our right fielder’s head when he was 64 years old! Amsterdam’s older basketball community was not about to let a little thing like a few too may birthdays stop them from playing the game that they loved. So back in the 1960’s, a group of men got together and formed a four-team organization known as the Over 30 Basketball League and after about a decade of existence, it actually had become one of the most popular recreation leagues in this city’s history. It reminded me of the City High Rise because you had to wait until you were a certain age to get in and even when you reached that age, you had to put your name on a waiting list because so many people wanted to to play! The first venue for “Over 30” games was the old Truax School. The final one a half century later was the gym at the Perth Bible Church. In between were millions of dribbles and hundreds of thousands of shots by guys who may have been losing some hair at the time but not their love for the game of basketball.

4. City Night Softball League: It was the big leagues as far as Amsterdam softball was concerned. Real uniforms, night games under the lights, dugouts, uniformed team managers, a public address announcer, an actual outfield fence and full line-up game stats in the next evening’s Recorder, about the only thing missing from Veterans Field during these games was a beer vendor! From the early 1960’s until about the mid ‘70’s City Night Softball was where all the best players in the area played the game. I can remember when Baia’s Tommy Moran and Rupsis’ Danny Phelps faced off against each other, those rickety sets of Vets’ Field bleachers would just about fill up to watch the league’s two best pitchers go at it. Just before the first ever City Night game on May 18, 1964, Recorder Sports Editor Art Hoefs used the opening section of his popular sports column to promote the new circuit and included this nostalgia churning comparison; “(Night softball) will provide sports competition and relaxation for fans after 8 p.m. Amsterdamians will recall sitting at the Mohawk Mills Park watching the old Rugmakers in the cool of summer’s night. Now this same opportunity will be afforded once more.” Pictured below is the 1971 City Night Champions, Baia’s Tavern. Led by Moran’s lights out pitching, the team representing the legendary Lyons Street establishment was the toughest club to beat for most of the seasons of the league’s existence.

5. Adult Bowling Leagues – Search the closets of any house or apartment in this city from right after World War II until Ronald Reagan left the White House and I guarantee it wouldn’t take you long to find at least one bowling ball. Everybody in this town bowled in one league or another and those leagues, which were organized at classic bowling alleys named Wilton, Bannisters, Sky View, Pin Haven, St. John’s and Windmill Lanes made it possible to bowl three games on a team in this town on any night of the week. Amsterdam certainly wasn’t alone in its love for bowling but no place had a bigger passion for the game or a richer tradition in the sport. One of the great thrills created by this wonderful sport was getting your name placed among those set in the thick bold faced type that used to appear under the heading “Aces of the Alley” on the sports pages of every single edition of the Amsterdam Recorder. Bowling was indeed Amsterdam’s favorite sport and it was the secretaries of the hundreds of bowling leagues that functioned in this city over the years, the men and women who kept track of all those scores and averages, who were the keys to making it all possible. Pictured below is the “Amsterdam Rug” sponsored team that won the 1970 Womens City Championship. 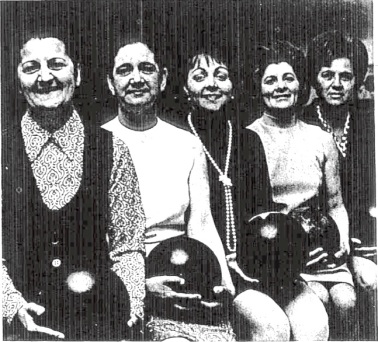 I will finish this list of the Top Ten Amsterdam Adult Sports Organizations in time to get them in my upcoming book which is scheduled for release later this year. I can promise you that though the next five may not have been as popular as those shown above, they most certainly have a rich and interesting tradition in this community. In the meantime, make sure you subscribe to my free monthly Amsterdam Top Ten Newsletter for previews and reveals of more Amsterdam Top Ten Lists. You can sign up for the newsletter here.