What struck me as I attempted to isolate ten decisions that caused the most negative consequences for Amsterdam, NY was that half of them were made hoping the results would be the exact opposite! The complete list of ten will appear in my new book; 50 Top Ten All-Time Amsterdam Lists, which will be released later this year. I’m also preparing a list for the top ten best decisions ever made for Amsterdam, which will also be included in the book. If you subscribe to my free monthly Amsterdam Top Ten Newsletter, you will receive a special offer that will permit you to reserve one of the first signed copies of the book at a special discounted price. You can subscribe to the free newsletter here.

1. Amsterdam’s oldest rug company decides to abandon the city. In 1954, Bigelow-Sanford Carpet Co. management announced the firm intended to consolidate its manufacturing operations into one location. The battle was on between Amsterdam, the original home of the Sanford half of the company and Thompsonville, Connecticut, where Bigelow was born. On January 29, 1955 the decision was announced and it was a horrible body blow to the upstate New York community, eradicating close to 2,000 jobs and emptying hundreds of thousands of square feet of factory space.

2. Ten years after Bigelow-Sanford moved out, Mohasco made the decision to begin the process of doing the same, relocating the firm’s carpet-making operation from its huge mills in Amsterdam’s East End to its new and expanding Laurens Park Mill in Dublin, Georgia. By 1968, the city once known as the Carpet-making Capital of the World had no carpets being manufactured within it. The last corporate office of the company started by the four original Shuttleworth brothers in 1878, left Amsterdam in 1987. Five years later, an arsonist set the firm’s former Forest Avenue complex ablaze and it seemed as if an entire city gathered to watch a mighty symbol of this community’s proud industrial past go up in flames.

3. City fathers and downtown merchants decide an enclosed downtown mall is best for the future of Amsterdam’s retail shopping district. At the time, I agreed with them and according to a phone survey conducted in 1972, so did over 80% of the people living in the city. Boy, were we all wrong! Remember though that the glory days of Amsterdam’s downtown had been waning since the late 1960’s. Big N and Family Bargain Center, this area’s first big box stores had opened on Route 30 north of the city and WT Grant’s left downtown for the same destination. Colonie Center and Mohawk Mall were also peaking in popularity. All the competition was emptying East Main Street of shoppers and just about everyone in this town thought something dramatic needed to be done. But those making the decisions went overboard! They ended up knocking everything down and starting all over again and when everything was done, a new, gleaming shopping Mall stood in the middle of what had been Main Street. Business was great at first, but then began tapering off, first slowly and then dramatically. One tenant after another began pulling out and by the 1990s all that was left was the building blocking Main Street and all the King’s horses and all the King’s men couldn’t put Amsterdam’s downtown back together again. 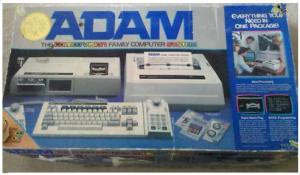 4. Coleco decides to make and sell a personal computer. Flush with both confidence and cash from their smashing Cabbage Patch Kids success, Coleco unveiled its plans to produce and sell the Adam Computer at the 1983 Consumer Electronics Show. Their strategy for the product sounded good. They hoped to sell a home computer bundled with a printer at the bargain basement price of $600, targeting children ages 8 to 16 and their dad’s. Their competitors at the time were Commodore and Atari and both sold much higher priced boxes and neither came with a printer. Coleco hoped to sell 500,000 units by Christmas and planned to have them shipped to stores by that August. But August came and went and so did September and October and still no Adam’s. It turns out Coleco was having all kinds of trouble fixing bugs in the printer and by the time December came around, the company could only ship 95, 000 units and almost all of those were defective. Coleco ended up getting crucified by the mainstream media and losing tens of millions of dollars on the Adam’s failure. Investors reacted by dumping Coleco’s stock. The company never recovered.

5. Based on the strong recommendations of the City Controller at the time, Amsterdam’s common council approved the purchase of new accounting software in 2008. The switch was supposed to make it easier for Amsterdam’s chief financial officer to manage the city’s money. Instead, it made it impossible. By 2009, Mayor Anne Thane knew things had gone haywire and told her common council the recordkeeping was a mess. A new controller, Ron Wierzbicki was elected in 2010 and he discovered the situation was much worse than everyone expected. He discovered it was impossible to accurately determine how much money the city had on hand, plus the municipality’s various bank accounts had gone un-reconciled for months. The problem grew even more severe when Wierzbicki died suddenly in December of 2012. A subsequent 2014 audit of the city’s books conducted by the state’s Comptroller’s office found Amsterdam had co-mingled bond anticipation note proceeds in its primary bank account that contained cash balances for all of its operating funds. This was illegal. In June of 2017, Amsterdam’s financial records for these years in question were still not in compliance and according to the current City Controller, Matt Agresta, they may never be!