Picking the ten greatest head coaches in Amsterdam High School interscholastic sports history would be an impossible task for anyone. There are too many sports, too many coaches and too many years gone by to consider. Then there’s the criteria used. Most wins and most titles certainly should weigh heavily but so should character, compassion and teaching skills in both the sport and life in general. So instead of calling this a Top Ten list or trying to rank these talented sports mentors in any order, I’m just going to refer to it as Ten of the All-Time Greatest Head Coaches list and apologize to all those great head AHS coaches I’ve had the pleasure of knowing or learning about who are not included.

John “Jack” Tracy – During his forty year career with the Amsterdam public school system this son of a downtown Amsterdam shoestore proprietor coached all three major sports and served as the Director of Physical Education to boot. He left his biggest coaching mark on the sport of baseball, serving as head coach of the AHS Varsity nine for 38 years beginning in 1925. His players included future big-leaguers Roger Bowman and Mac Kuczek plus a busload of outstanding student athletes who made it to the minor leagues.

Frank Derrico – This is the guy who transformed Amsterdam High School Football from a very popular school activity into all of Amsterdam’s favorite pastime. Taking over  as head coach of the Rugged Rams in 1978, he spent the next 17 seasons turning the Amsterdam gridiron program into one of the best run and most admired in New York State, culminating with a State title in his final year at the helm. He was a football professor and if you ask other great high school football coaches in the area who who had to do battle against his teams they will all tell you that Frank Derrico’s players were among the most impassioned and best prepared they ever faced. After leaving the helm of the Rams, he became offensive coordinator at Albany State University.

Brian Mee – Do great players make great coaches? Brian Mee sure did. He was one of the greatest athletes in Johnstown High School history and then starred as a catcher at Ithaca College. He was so good as a player that the Chicago Cubs signed him to a contract in 1960 and he made it all the way to double A ball before hanging up his glove and getting into teaching and coaching. When he retired as head baseball coach at Amsterdam High School three decades later, his teams had amassed more than 400 wins including the now legendary stretch of 53 consecutive wins from 1973-’75. His AHS teams won 3 Class A and 2 State championships and Mee has since been honored with inductions into both the New York State and Capital District Baseball Halls of Fame. Oh and did I mention he also won a Class A Football title as head coach of the Rugged Rams in 1973?

Pat Reilly – There was no Amsterdam High School wrestling program when Pat Reilly was hired to teach history at the Wilbur Lynch High School in 1964, This guy started it from scratch, nada, nothing! Three decades later, thanks to his passion, skill and leadership, the school had one of the best mat programs in all of Section II. Here’s what his grapplers produced during his career as head coach: 267 dual meet victories; 9 Big Ten titles; 3 Sectional championships; 10 individual Section II crowns, and 25 individual Class A champs. Is it any wonder why the high school’s wrestling room is now named the Patrick H. Reilly Hall of Fame Wrestling Gymnasium? Mr. Reilly also served as head coach of AHS Softball at both the Varsity and JV level. One of the most beloved figures in the history of Amsterdam High School athletics, he was named to the Section II Wrestling Hall of Fame in 2009, the New York State Wrestling Hall of Fame in 2010 and the AHS Hall of Fame in 2015.

Rick Cetnar – A superb basketball player for Amsterdam High and Rochester Institute of Technology in the early 1960’s, Cetnar returned to AHS a decade later and became the winningest Varsity Basketball Coach in the school’s history during a career that spanned 15 years there and 4 more seasons at the helm of Amsterdam’s Bishop Scully High’s Varsity Hoops program. Along the way, he had the opportunity to coach the kid I believe was the best basketball player in AHS history, Cetnar’s son Todd. In fact, those teams that featured both Cetnar’s played some of the best basketball Amsterdam hard court fans have ever seen and made it to the only State championship final in the program’s history in 1994. In all, he won 247 varsity games as a coach. He’s been inducted into the Capital District Basketball Hall of Fame, the RIT Hall of Fame and the AHS Hall of Fame. 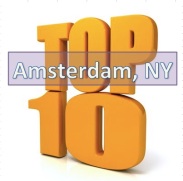 I’ve got five more head coaches on this list. If you’d like to see who they are before my Amsterdam All Time Top Ten’s book comes out later this year, I will be including them in the April issue of my free Amsterdam Blog Newsletter, which is being distributed next week. If you’re already on the newsletter’s e-mail distribution list, you’ll see who these next five legendary coaches are when you get your copy. If you’re not on the newsletter list, you can sign up here.