1. Guy Park Avenue – For over a half century, just about every life that began in Amsterdam began on Guy Park Avenue either at the old City Hospital where the Sirchia Memorial Park now sits or at St Mary’s Hospital, just seven blocks to the west. Thousands of us were educated on that stately thoroughfare, many at the old Guy Park, West Spring or St. Joseph’s Elementary Schools and even more within the red brick fortress known as Theodore Roosevelt Junior High. Early Guy Park-based houses of worship included St. Joseph’s Parish, the high pitched steeple of Trinity Lutheran and the reach-for-the-sky bell-tower of Emmanuel Press. Only the Lutherans still remain but have since been joined by Amsterdam’s only Synagogue and a new First Baptist Church. There was plenty of commerce transacted on Guy Park as well. Businesses included two bakeries, a busy greasy spoon known as the Beanery, a popular bar called Bigler’s at the corner of Wall, Steve Soulla’s always busy CardCraft, two very successful car dealers, and three of the city’s largest super markets. It was Guy Park’s palatial homes, however that truly made this Avenue one of Amsterdam’s most impressive showcases. The wealthiest families among us, with last names like Yund, Chalmers and Shuttleworth built a series of elegant mansions that continue to serve as a connection between this community’s prosperous past and the hopes and dreams for a better future.

2. East Main Street – There may never again be a more enjoyable shopping experience in Amsterdam than the one Rug City residents used to get when we visited the four-block section of the old East Main Street known as “downtown”. In its hey-days from the turn of the twentieth century until the mid-to-late 1960’s, it was a huge glorious open air department store where you could purchase everything you could possibly need. But unlike the big box department stores of today and huge indoor malls, the stores in Amsterdam’s downtown were owned and/or managed by our neighbors with familiar last names like Pingitore, Luciano, Fox, Olender, Miller and Sochin. It was truly the heart of our city, the place where all the parades took place, where the Christmas decorations were hung, where the busses all headed and where you took your first love on a date. But development of Route 30, enclosed suburban malls and an evolving restructuring of the retail industry in general sucked Amsterdam shoppers off of Main Street like a brand new Electrolux vacuum and City leaders responded by converting most of downtown into an enclosed mall with a huge parking garage. I was one of those who thought at the time it was a smart move. I was wrong!

3. Church Street – We’ve been buying our stamps and mailing care packages to family members who remained in the “old countries” on the bottom block of this regal pathway for the past five generations and also borrowing the books we read. Most of Amsterdam’s Presbyterian’s worshiped at the glorious edifice that long stood on the corner of Grove, which also gave the name of this street its visual relevance. When that landmark structure tragically went up in flames an entire city mourned the loss. The most influential family in our city’s history lived just a half block north and when they abandoned Amsterdam they left us their empty mansion from where one administration after another has tried to manage the affairs of the city they threw into distress. A block further north sits the 2-million square foot carpet-making complex the Sanford’s also left us. It did not remain empty for long. It soon was reoccupied and retrofitted to produce litterbags, fiberglass and some of the most popular toys in the world including a funny looking doll that came with its own birth certificate. Now, many of those mill properties are empty again, perhaps waiting to be introduced to the writers of Amsterdam’s next industrial chapter. Every time I drive further north past the “Polish Bank” I can still see the long pay-day lines of neighborhood men and women all putting more of their money into that institution’s vault than they would ever take out. And up toward the younger top of Church were the new modern well-kept homes built by many of those proud Polish Americans along with a wonderful modern Catholic High School that forged an amazing amount of academic and interscholastic sports excellence during its much too brief existence. Fortunately that same structure continues to provide a compelling school choice for Amsterdam’s parents. 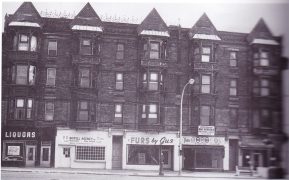 4. Market Street – For the bulk of this city’s history, Market Street has been one of the most diversified and heaviest traveled thoroughfares in Amsterdam. It’s physical length and strategic location certainly helped make it so. It battled Church Street even up for the designation of Amsterdam’s most important south-north artery and it became the accepted dividing line between the eastern and western portions of our city  Not only was it connected to Main Street just where our downtown section began, it also started directly opposite the path of the old Mohawk River bridge, the entry point for anyone entering the north side of the city from the south. The most significant commerce portion of Market was bundled on the street’s lower southern end. The now-demolished Sanford Homestead building was the long ago anchor of that section and the first building facing west when you turned the corner and went north from Main Street. Its original owner, the mighty Sanford family lived on its upper floors while the first floor storefronts gradually evolved into Larrabee’s, one of downtown’s longest surviving and most prosperous retail businesses. The Blood building and Barnes Hotel anchored the west side of lower Market for decades. While retailers and two movie theaters crammed into the street’s street-level spaces, lawyers, doctors and dentists began hanging their private office shingles on the upstairs floors. The pedestrian and automobile traffic that resulted made traffic cops mandatory up and down the lower portion of the street. Even after urban renewal completely modified the nature and traffic flow of lower Market, new banks and a Holiday Inn kept it busy for years. Meanwhile the northern upper end of Market became home to some of the most beautiful homes ever constructed in our community and its side streets evolved into some of Amsterdam’s all-time greatest neighborhoods. Though the current river bridge has cut off traffic from Market’s lower portion, the upper end still sees more traffic than any other street in this city as the primary pathway to the cluster of retail businesses on Route 30, known locally as the “Miracle Mile.

5. Division Street – Still a major west-to-east route through Amsterdam but the younger generations in this city most likely have no idea just how significant a street Division was in the history of this community. Right up until the mid 1930’s the eastern end of the thorougfare was home to this town’s post office, its high school and its phone company. From Guy Street east beautiful architecture graced both sides of the street in the way of well kept private homes, houses of worship fraternal clubhouses and professional offices, a few of which still stand. The street pretty much maintained its professional composition right up until the 1970’s when urban renewal, relocation of the junior high to Lynch Middle School and accommodation of the housing needs of Amsterdam’s senior and low income residents created a whole new look and feel to Division. The YMCA and a beautifully enlarged Amsterdam Savings Bank building remained in place on the eastern end but the new Route 30 South arterial, high rises for the elderly and construction of “the projects” changed the entire look, feel and mission of the street. Meanwhile west of Guy Street, initially evolved into one of Amsterdam’s most popular West End Italian neighborhoods by the 1940’s. It included barber shops, grocery stores, tailors, shoemakers and coffee shops plus a several-blocks-long section of two-family homes. Long before a smart phone got smart, the front porches of those homes were where Division Streets families and neighbors gathered to communicate with and enjoy each others company. Further west on the corner of Henrietta, Division Street was home to the large garage that housed Amsterdam’s city buses until that structure burnt down and was replaced by Amsterdam’s very first “car wash”. I still remember going down there with my Dad to wash his station wagon and being shocked by the force of the water when he let me squeeze the trigger on the first high pressure nozzle I had ever encountered.

What are my other five Top Ten Amsterdam streets? You’ll have to wait until my full Amsterdam All-Time Top Ten book comes out later this year to find out their names and read my tributes to each but I will give you the following clues;

The jury is still out on which will be the tenth and final street selected for my list.