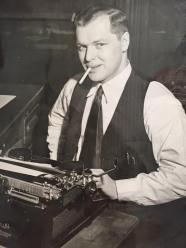 The very last of his very popular “Sportbook” columns appeared in the Amsterdam Evening Recorder on June 28, 1957. It was positioned on page ten, top left corner. He started it off with a question in italicized, bold 14 point type; “Why Not a Swimming Pool?” It was a fitting way for Recorder Sports Editor, Johnny Page to say good-bye to a community that had been his home all his life and one that he loved dearly.

Born in the Rug City on October 23, 1916, he was the only son of John and Sarah Miller Page. His own childhood was one filled with tragedy. His father was killed while serving his country during World War I and his body was buried in Flanders Field in France. His mom could not live with the grief of losing her husband and ultimately ended her own life when her son was just 15-years-old.

Homeless, young Johnny took a room at the Amsterdam YMCA. At what must have been the very lowest point in his life it would be hard for anyone to predict that there would be any sort of a silver lining in his depressing circumstance. But there actually was.

Her name was Ruth Eggleston and she was working as the local Y’s part-time receptionist at the time John Page became a tenant there. They developed a friendship that would evolve into a beautiful love story and an enduring marriage that began in 1940, when they were married in the home of Ruth’s parents on Amsterdam’s Kimball Street.

Page graduated from Amsterdam High School in 1935 and then attended Syracuse University before returning home and accepting a position as a staff photographer with the Recorder in 1939. When the US entered World War II, Page enlisted in the US Navy. He became a Chief Petty Officer in the Seabees. His unit was deployed to Iceland where Page took part in the creation of the first aerial map of that island nation by photographing its terrain from a helicopter. It was there that he developed ulcers and was eventually given an Honorable Discharge so that he could receive treatment at the VA Hospital in Albany.

He returned to the Recorder in 1944, replacing the legendary Jack Minnoch as Sports Editor at that time. During the next 13 years not only did he fill Minnoch’s huge shoes more than adequately, he also established his own legacy as one of this town’s most talented and popular journalists. He had the opportunity to cover the final six seasons of Amsterdam Rugmaker baseball and did a superb job doing so. He loved covering the local high school scholastic sports scene and area youth leagues as well. He also became one of the most skilled local pundits of both Saratoga thoroughbred and harness track horse racing in this region of the state.

In addition to sharing his expertise of sports in print, Page became a local radio personality as well…

If you would like to learn more about Johnny Page’s last sports column you can read the rest of my story about this talented journalist in the new second edition of A Year’s Worth of Amsterdam, NY Birthdays, which will be available before the 2016 Holiday season. You can now reserve a copy of this book and by doing so, also qualify for a significant discount off its list price. You won’t be asked to pay for the book now and you’ll be notified as soon as it becomes available. You can reserve your copy now using this on-line order form.

I also distribute an Amsterdam, NY Birthday Blog Monthly Newsletter that includes the full birthday posts for three of the twenty-to-thirty  people whose birthdays I recognize each month. Each newsletter also includes an Amsterdam Birthday Quiz that will test your knowledge and memory of people and events in your hometown.