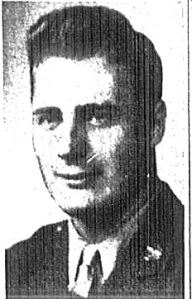 He was an Amsterdam East Ender who grew up on Forbes Street, the son of Lithuanian immigrants. He, his parents and two sisters were parishioners of St. Casmir’s Church and their social center was the American Lithuanian Club on Liberty Street. Walter Degutis was born on October 19, 1915 and graduated with Isadore Demsky in the Wilbur Lynch High School Class of 1934.  He then got a job as a “creeler” in the Mohawk Carpet Mills. Creelers were the folks who made sure the giant weaving machines never ran out of yarn.

Degutis loved sports.He played basketball in the Amsterdam City League and in 1938, he was a valuable back-up center on a team called “The Retailers” who captured the Amsterdam City League championship with a record of 36-3. But his best game was tennis. He was the youngest member of the Amsterdam Racquet Club, a team of local players who competed throughout the region. That same year, he and his partner Peter Togaila came within a single point of capturing the Amsterdam City Doubles Tennis Championship, losing the coveted Charles S. Tracy Trophy in a tiebreaker to the team of Doc Ferguson and Charles Mayn. The Amsterdam Recorder reporter covering the event which was held at the now-long-gone Coessen’s Park courts, described Degutis as the “star of the match” and commented that his brilliant play that afternoon was “a treat to watch.”

With war raging in Europe and Japan threatening peace in the Pacific Congress passed the Selective Service Act of 1940, which was signed into law by Franklin Roosevelt. The Act established the first peace-time draft in United States history. It required all American males between twenty-one and thirty-six years of age to register for the draft. The government selected men through a lottery system. If drafted, a man served for twelve months. According to the Selective Training and Service Act’s provisions, drafted soldiers had to remain in the Western Hemisphere or in United States possessions or territories located in other parts of the world. The act provided that not more than 900,000 men were to be in training at any one time, and it limited service to 12 months. It also permitted young men far down on the lottery list and those older than 18 but not yet 21 to step forward and volunteer for service, thereby helping local draft boards fill enlistment quotas and making it possible for some men higher up on the lottery list, who would find a year in service particularly inconvenient for themselves and their families, to avoid being drafted at that time.

If you would like to read the rest of my story about Sgt. Degutis it will be included in the new second edition of A Year’s Worth of Amsterdam, NY Birthdays, which will be available before the 2016 Holiday season. You can now reserve a copy of this book and by doing so, also qualify for a significant discount off its list price. You won’t be asked to pay for the book now and you’ll be notified as soon as it becomes available. You can reserve your copy now using this on-line order form.

I also distribute an Amsterdam, NY Birthday Blog Monthly Newsletter that includes the full birthday posts for three of the twenty-to-thirty  people whose birthdays I recognize each month. Each newsletter also includes an Amsterdam Birthday Quiz that will test your knowledge and memory of people and events in your hometown.