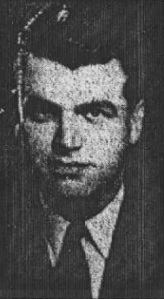 During the eighteen years he served as Amsterdam’s representative in the New York State Assembly, Don Campbell was the most powerful politician in this town. In addition to getting reelected to his seat in Albany eight times, he was also made head of the Republican Party in Montgomery County giving him tremendous influence over who could run for political office in this area and in many cases, who could not. But just as he reached the zenith of his power in state politics, with his name at the very top of the very short list of candidates to become majority leader in the Assembly, Campbell’s career in elected office came to an abrupt end. He lost his bid for a tenth term to upstart Mary Ann Krupsak, the granddaughter of the Rug City’s Fourth Ward Democratic Party boss, big Mike Wytrwal.

Campbell was born in Amsterdam on August 2, 1922 and was raised on Pleasant Ave. His father Arthur was heavily involved in local Republican party politics and served as Alderman of Amsterdam’s old Seventh Ward.  It would be tough to come up with a more popular student and athlete than the young Campbell was during his high school days. In addition to being one of the most celebrated soccer players in Rug City history as a member of the Amsterdam Weavers, he was also an honor student, a class officer and a four-sport letterman as a member of the Amsterdam High School Class of 1940. Campbell continued that legacy of scholastic and athletic excellence at Columbia University. He made the basketball team there and and once again became an honor student. He then enlisted in the Army during WWII and served three years, attaining the rank of lieutenant. Upon his discharge, he went and got his law degree at Albany Law School, began practicing his profession in his hometown and married Amsterdam native Phyllis Topping. They would raise a son and two daughters in their homes on Locust Avenue and later Golf Course Rd.

Campbell’s career in the Assembly almost ended before it started. When the Montgomery County Republican Party met to determine who their candidate for the 168th Assembly District was going to be in 1950, Ward J. Hinkle, president of Adirondack Radio Supply had more than twice as many committee person votes than Campbell did but not a majority. It was only after Amsterdam attorney Guy Tomlinson removed his name from consideration and threw his support to Campbell that a majority decision was reached and it was Campbell who was selected by the razor thin margin of just a single vote…

My complete birthday post for Don Campbell will appear in the new second edition of A Year’s Worth of Amsterdam, NY Birthdays, which will be available before the 2016 Holiday season. I also distribute an Amsterdam, NY Birthday Blog Monthly Newsletter that includes the full birthday posts for three of the twenty-to-thirty  people whose birthdays I recognize each month. Each newsletter also includes an Amsterdam Birthday Quiz that will test your knowledge and memory of people and events in your hometown.