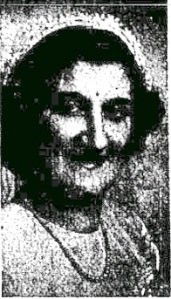 Growing up on the South Side of Amsterdam, NY, Antoinette Friello certainly had no idea she would one day make history in her hometown. Born on July 23, 1923, she was the daughter of Giacomo and Nancy Friello and lived at 108 Florida Avenue. She went to Fifth Ward School, attended mass and catechism at Mt. Carmel Church and graduated from Wilbur Lynch High School in 1941, just before the War started. She then went to work as a seamstress at the Jay Martin Dress Shop in downtown Amsterdam. During all that time, just a few doors away from the Friello home on the opposite side of the street, Mr and Mrs James Villa were raising their own family of five sons. One of those boys, the one named Mario would end up marrying Antoinette in November of 1950. The young couple would pretty quickly have three children of their own, a daughter Adeline and two boys, Dominick, who was born on his Mom’s birthday in 1953 and finally Michael. Now I never had the privilege of meeting Antoinette Villa but I have close friends who knew her well. Each of them has told me she was one of the sweetest and kindest ladies they had ever met.

She became Amsterdam’s official first lady for the first time in January of 1980, after her husband won a four-man race for Mayor the previous November. He was reelected in 1983 and then took four years off before running successfully again for the city’s top post in 1993. Antoinette held down the fort at their Florida Avenue home for all the years Mario was involved in public service. After his final term at City Hall, Villa retired and Antoinette probably got to see him more during the last eleven years of their marriage than she had during the first fifty. Unfortunately, Antoinette passed away in September of 2011, four years before her youngest child, Michael Villa would win his own race for Mayor of Amsterdam, thus making Antoinette the only woman in the history of our community to have both a husband and a son who served as Mayor. Though you can’t see her in the accompanying photo showing father and son embracing at Mike’s swearing in ceremony, both men will tell you they felt Antoinette Villa’s presence there that day and she was most certainly smiling from ear to ear.

My complete birthday post for Mrs. Villa will appear in the new second edition of A Year’s Worth of Amsterdam, NY Birthdays, which will be available before the 2016 Holiday season. I also distribute an Amsterdam, NY Birthday Blog Monthly Newsletter that includes the full birthday posts for three of the twenty-to-thirty  people whose birthdays I recognize each month. Each newsletter also includes an Amsterdam Birthday Quiz that will test your knowledge and memory of people and events in your hometown.