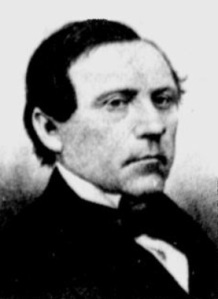 Today’s Amsterdam Birthday Celebrant not only founded the newspaper that still serves Amsterdam,  he also is the reason the city of Milwaukee, Wisconsin is not spelled “Milwaukie!” Josiah A. Noonan was born in Amsterdam, NY on May 13, 1813. In 1826, when he was just 13 years old, he entered into an apprenticeship with a local printer. By that time, the first Amsterdam newspaper ever published (in 1821) known as the Mohawk Herald had already been sold and moved to Johnstown, where it fittingly became known as the Johnstown Herald. Chances are pretty good that when Noonan started out as an apprentice, he was working for a man named John P. Van Sice, who is credited with founding the second newspaper in the city’s history, a weekly called the Amsterdam Morning Sentinel, which published 40 issues between 1827 and ’28 and then went out of business.

By 1833, the then 20-year-old Noonan was ready to publish his own weekly. He named it the Mohawk Gazette. A year later, the name was changed to the Intelligencer. He evidently continued on as publisher of the paper for three years until 1836, when it was sold to Simeon B. Marsh who took over the roles of editor and publisher for the next 18 years. Xenophon Hayward then bought the paper from Marsh who changed its name to the Recorder and the rest, of course, is history. So what happened to today’s birthday celebrant? Quite a bit as it turns out.

Noonan left Amsterdam for Wisconsin when Marsh took over as publisher here in 1836. Wisconsin had just been named an official Territory of the United States that April. The opening of the Erie Canal the previous decade had led to a dramatic increase in westward expansion and Noonan was one of many New York and New England residents who headed there in search of the opportunity to get in on the ground floor of the new Territory’s farming, business and political sectors.

On his way west, Noonan had stopped in Chicago to purchase a printing press. As soon as he got to Milwaukee, he got himself heavily engaged in local Democratic party politics and was actually part of the group of citizens selected to survey and stake out the Territory’s new Capitol City of Madison. By 1838, he was ready to try publishing another newspaper and he chose Madison as his base. The Wisconsin Enquirer became that city’s first newspaper, but not for long. After two years of struggling to make ends meet, Noonan moved his equipment back to Milwaukee, intending to publish the Enquirer from there. When he got there, he was approached by the publisher of another Milwaukee newspaper, The Advertiser to see if Noonan was interested in buying him out. The Amsterdam native made the deal and took the opportunity to launch a whole new paper called the Courier.

At this point Noonan’s fortunes began to change…

The rest of Josiah Noonan’s birthday post will be published in the second editionof A Year’s Worth of Amsterdam NY Birthdays, which will be available for sale right after Thanksgiving. To make sure you get your hands on one of the first copies, join my mailing list here.

The first edition of A Year’s Worth of Amsterdam NY Birthdays, which features my birthday posts for 320 current or former Amsterdam residents, is currently being sold at Liberty Fresh Market, on Route 30 in Amsterdam. You can also purchase it online here.

Today would have also been the 61st birthday of Amsterdam native and former Ivy League football referee Marty Harrington, who passed away in January of 2016 after a valiant struggle with cancer.