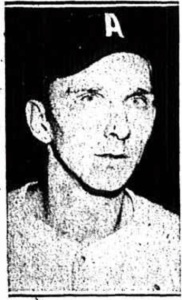 The members of this Nation’s greatest generation were forced to grow up quick. Their childhoods included the stress of living though the Great Depression and as soon as most of the guys began shaving, they found themselves fighting in a World War. Today’s Amsterdam Birthday Celebrant was just 21 years old when his bus pulled into Amsterdam in April of 1946. He had already served a two-year-hitch in the Navy and now he needed to earn a living. But unlike thousands of his fellow sailors, Dick Kryhoski didn’t just need to do well on an interview to get a full-time job, he had to earn his way to a position. And the first test he needed to pass took place in Amsterdam.

Kryhoski was born in Leonia, New Jersey on March 24, 1925. He had been a great high school baseball player, good enough that when he was discharged from the service the great Yankee scout, Paul Krichell signed him to a contract. He was then assigned to the Rugmakers, New York’s farm team in the old Class C Can-Am League.

Can-Am League baseball  had been suspended during the war so as the 1946 season began, all of Amsterdam was looking forward to rooting for their favorite team again. Kryhoski was a first baseman, and team manager Solly Mishkin gave him 30 starts at that position to prove he belonged there. But Kryhoski did not do well. Johnny Page, the Recorder sports editor at the time told his readers that Kryhoski was pressing, trying too hard to do well instead of just playing free and easy. After those first 30 starts, the first baseman’s average was a puny .224 and the Yankees demoted him to “D” ball.

That’s when things began to click for him. He smacked 19 home runs during the balance of that 1946 season and averaged .396. In 1949, he became the only member of that 1946 Rugmaker team to make it to the big leagues as a Yankee. But when he got to the Bronx, he was about to get tested yet again.

The rest of Dick Kryhoski’s birthday post will be published in the second editionof A Year’s Worth of Amsterdam NY Birthdays, which will be available for sale right after Thanksgiving. To make sure you get your hands on one of the first copies, join my mailing list here.

The first edition of A Year’s Worth of Amsterdam NY Birthdays, which features my birthday posts for 320 current or former Amsterdam residents, is currently being sold at Liberty Fresh Market, on Route 30 in Amsterdam. You can also purchase it online here.