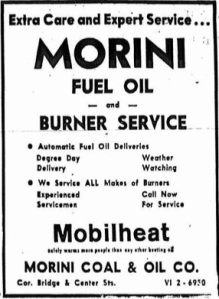 The first Amsterdam home I owned cost me $19,000 in 1980. One of the reasons I got it so cheap was the condition of its oil-burning furnace. It was probably about sixty years old, completely inefficient and had a faulty motor switch that required me to stick my hand into the unit and turn the rotor blade with my fingers to jump start it. I had put every available penny I had into that house and could not afford to fix or replace that fuel-sucking monster that first winter so whenever I couldn’t get it going, I’d call Morini Coal & Oil to rescue me. That’s how I met today’s Amsterdam Birthday Celebrant.

Larry Morini Jr. would often show up at my house on a freezing cold night and already be laughing when I let him in the back door. As he headed down my cellar stairs to once again try and coax another week out of my asbestos wrapped nemesis he’d say something funny like “You do know I carry plain old tools in this box and not a magic wand, right?”

But the important thing was that Larry or one of his outstanding crew would never ever leave my house without making sure that damn furnace was running again. And since I purchased my heating oil from them, they never ever charged me for any of those calls…

I’ve already started work on the second volume of “A Year’s Worth of Amsterdam Birthdays” and Larry Morini’s complete story will be featured in it. I will be sharing the complete posts of some of the Volume II birthday celebrants in future issues of the Amsterdam Birthday Blog Newsletter. If you are not yet a newsletter subscriber, you can sign up for free here.

This other March 1st Amsterdam Birthday Celebrant had a city parked named in his honor.