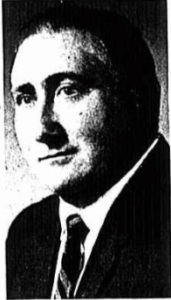 Talk about entrepreneurial vision, Lou Petrosino was always about five-to-ten years ahead of everyone else in conceptual thinking. In addition to great instincts and outstanding business and management skills, this February 25th Amsterdam Birthday Celebrant had the work ethic of a colony of hungry ants! It was a formidable combination and it became the driving force behind one of the most successful businesses in the history of this Mohawk Valley city.

Born here on February 25, 1919, he was one of eight children raised by Joseph and Maria Busecchia Petrosino who had come to Amsterdam from Salerno, Italy in 1912. By the time he was 11 years old he was already working in the grocery business, for Gamberdella’s Market, a popular East Main Street neighborhood food store. He went on to graduate  from Wilbur Lynch High School in 1937. In 1951 he married the beautiful Helen Brewster, who grew up on East Main Street,  just a few doors away from Gambardella’s and who had graduated from Bentley School of Accounting & Finance in Boston. In addition to getting a wife, Petrosino had found the perfect business partner.

Lou had continued his career at Gambardella’s after high school and by the time he married Helen, he was a partner in the market. So when the original owner wanted to retire in 1953, Lou bought him out and the Lou’s Super Market saga began.

It started with more education. Gambardella’s had not previously sold meat so Lou knew next to nothing about doing so. He solved that problem by taking a six month course at the Armour Meat Institute in Chicago. He also somehow found the time to design and oversee the remodeling of the store’s East Main Street storefront. Finally, Lou and Helen opened their 6,000 square foot  Lou’s Super Market on December 21, 1953, just in time for Christmas food shoppers…

I’ve already started work on the second volume of “A Year’s Worth of Amsterdam Birthdays” and Lou Petrosino’s complete story will be featured in it. I will be sharing the complete posts of some of the Volume II birthday celebrants in future issues of the Amsterdam Birthday Blog Newsletter. If you are not yet a newsletter subscriber, you can sign up for free here.

Last year on this same date we looked at an amazing talent that wouldn’t have existed if another February 25th Amsterdam Birthday Celebrant had never been born.