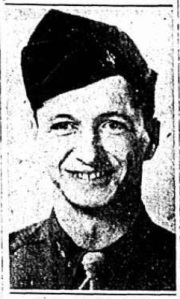 Alfred J. (Bud) Agard Jr. grew up at 230 Florida Ave on the South Side of Amsterdam, NY. His dad owned and farmed the land up on Yankee Hill that he would one day sell to Montgomery County to become the site of the County Infirmary. I found an article in the Gazette describing a prize the senior Agard had won in 1925 for raising the best poultry and an ad from a 1927 edition of the Amsterdam Evening Recorder for Hellmann’s Mayonnaise that listed the senior Agard as the distributor of “The Original Home-Made Salad Dressing” here in Amsterdam. So I’m guessing eggs were a big part of the childhood of today’s Birthday Celebrant.

Born on February 24, 1924, by all accounts, Bud had grown up to become a popular, hard-working young man in the Rug City. He had been a Recorder paper boy in his younger days and his uncle, Francis Collins was Amsterdam’s Police Court Judge. When he graduated from Wilbur Lynch High School in 1940, he obtained a coveted apprenticeship as a machinist at the GE Main Plant in Schenectady. But then Pearl Harbor happened.

Without hesitation, Agard enlisted in the Army Air Force. He wanted to fly planes. He reported for duty in February of 1943, two days before his 19th birthday…

I’ve already started work on the second volume of “A Year’s Worth of Amsterdam Birthdays” and Bud Agard’s complete story will be featured in it. I will be sharing the complete posts of some of the Volume II birthday celebrants in future issues of the Amsterdam Birthday Blog Newsletter. If you are not yet a newsletter subscriber, you can sign up for free here.