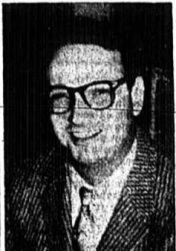 I first met Irving Tenzer in the late 1980’s. My wife Rosemary and I stopped in his family’s furniture store on East Main Street in Amsterdam, NY looking for a chest of drawers for our boys’ bedroom. The store was housed in what used to be the old Whelan’s Pharmacy on the corner of Main and Chuctanunda Streets, which until the end of 2015 served as the home of the Wrestling Hall of Fame. Both Irving and his son Mark were in the store that day. I recognized Mark because before he went into business with his dad, he had been an Amsterdam city police officer. Irving introduced himself and began a pleasant and memorable conversation with us that lasted for about an hour and included a full tour of their building. We ended up purchasing the drawers from Tenzer’s and I distinctly remember the amazingly positive impression today’s Birthday celebrant made on us that day. He was to put it simply, an incredibly nice man.

Born in Brooklyn on December 26, 1924, Irving Tenzer enlisted in the Army Air Force after high school and served his country in both WWII and Korea. When he left the service, he moved south to Miami and began his long and distinguished career in the furniture business. He first went to work at the Empire Furniture Factory where he received formal training in furniture reupholstering. He fell in love with the craft. He also fell in love with an Amsterdam native named Ruth Migdal, who had also just recently moved to Miami. They got married there at the home of Ruth’s cousins in March of 1951. They remained in the Sunshine State for a year and then decided to move back to Ruth’s hometown to raise a family. In addition to their son Mark they had a daughter named Mindy who was a couple of years behind me at Wilbur Lynch High School.

Irving got a job at the Grand Rapids Furniture Store in Amsterdam. During the next decade he…

You can read the rest of my story about this former Amsterdam business owner in my new book “A Year’s Worth of Amsterdam Birthdays.” To order your copy, click here.