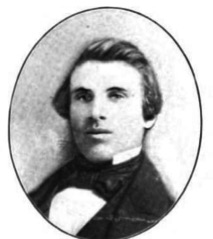 In 1740, a gentleman by the name of Gabriel Manny was born in New York City. At some point he came northwest and settled on a farm two miles north of Amsterdam, NY at the intersection of two roads. That intersection came to be known as Manny’s Corners. Gabriel Manny and his wife had a son they named Gabriel Jr. who would grow up to operate a very popular tavern and stagecoach stop on the north side of what is now the Cranesville extension of East Main Street. Manny Jr. and his wife had several children and one of them was a son named Pelvis. Pelvis would marry an Amsterdam woman named Sarah Swart and on November 28, 1825 Sarah gave birth to today’s Amsterdam Birthday Celebrant.

At some point in the early 1850’s, Pelvis Manny moved his family to a farm near McConnell, Illinois. John Henry Manny had moved westward with his parents and helped his father manage and work that farm which included a large crop of wheat. They had heard that a man named George Esterly manufactured a horse-drawn reaper up in Wisconsin so John and his father went there to purchase one. Unfortunately, when they arrived they discovered that Esterly needed quite a bit of lead-time to build one of these things which meant the Manny’s would not be able to obtain one in time for that year’s harvest. Pelvis returned to Illinois but John Manny stuck around and helped Esterly build the header for one of his machines. While he was helping he was also observing and learning and when he returned to Illinois, the younger Manny convinced his dad that not only could they make their own reaper, they could replicate Esterly’s business model and make enough machines to sell to surrounding farms.

So how did this Amsterdam native get himself involved with Abraham Lincoln? You can read the rest of my story about John Henry Manny in my new book “A Year’s Worth of Amsterdam Birthdays.” To order your copy, click here.