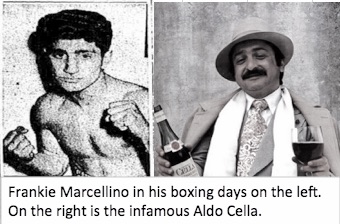 Today’s Birthday Celebrant was an icon of Amsterdam, New York’s South Side neighborhood. One of the most exaggerated phrases in the English language is “no one ever said a bad word about so-and-so.” It was no exaggeration when applied to this kind and wonderful man who was known to his friends as “Aldo” because in his later years he so closely resembled the actor who played Aldo Cella, the long-used promotional pitchman for Cella Lambrusco.

Frankie Marcellino was born in Fort Plain, NY on November 25, 1922. He moved to Amsterdam as a young boy with his parents, two brothers and a sister. He graduated from Wilbur Lynch High School in 1941 and served in the US Navy during WWII as a motor machinist on the USS Monrovia, an attack transport vessel that saw plenty of action in the South Pacific during which Frankie earned a Purple Heart. He was a skilled lightweight boxer as a teenager and he won lots of bouts in the Navy as well.

After the war he had jobs with GE and ALCO in Schenectady, before going to work for the A&P Supermarket, in Amsterdam. In 1951, he married the love of his life. Helen Agosta and they raised a daughter Melanie and son Frank Jr. Sadly, Helen died much too young in 1974, leaving a huge hole in Frank’s life. That hole got filled by Frank’s kids, his grandchildren and a group of very good friends who together made sure he would never get too lonely…

You can read more about this Amsterdam original in the new book “A Year’s Worth of Amsterdam Birthdays.”