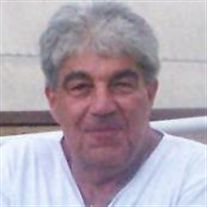 Lot’s of people in this town who are my age felt a lot sadder and older this past summer when we heard the news that Felix Persico had passed away. For much of his life he was known as “Shorty’s boy.” If you were his friend three things were certain; you were one of many, you argued with him fifty percent of the time, and you absolutely loved being with him.

It took some serious health issues to slow him down because nothing else ever could. For most of his life he exercised like a demon and then wore those infamous short shorts and armless sweatshirts just about 12 months a year to show us all the results. He moved from his beloved South Side a long time ago, but he came back across that bridge just about every day.

He was employed by the Thruway. If you were a commuter who used that toll road to get to and from work every day, you got used to seeing Felix working on a road crew, manning a snow plow or operating that backhoe high up on the ledge of that dark-rocked cliff that borders Exit 27’s entrance ramp. He worked like he did everything else in his life, hard as hell. Then his back gave out…

You can read the rest of my story about this Amsterdam native in my new book “A Year’s Worth of Amsterdam Birthdays.” To order your copy, click here.