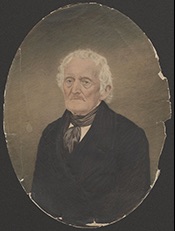 No, not that one. This Benedict Arnold was born in Amsterdam on October 5, 1780, which was two weeks after the other Benedict Arnold’s plans to turn over West Point to the British were discovered. Since there were no cell phones, Internet, telephones, telegraph, air mail etc. back then, Elisha and Sarah Arnold had no way of knowing they had just named their newborn son and youngest of nine children after the most infamous traitor in our country’s history. The news of the General’s treachery had not yet reached Amsterdam.

As it turned out, Amsterdam’s Benedict Arnold did just fine in life despite the negative connotation his name must have caused each time he was introduced to someone. You had to believe he came up with some sort of one line comeback whenever a new acquaintance was introduced, perhaps something like “Pleasure to meet you but please don’t tell me anything you wish to keep a secret.”

It helped that the Arnold’s were evidently one of Amsterdam’s earliest families and largest landowners. Young Benedict attended Amsterdam’s common schools and became a merchant. His general store was located on the corner of Main and Bridge Streets. He also served in the New York State Militia during the War of 1812.

Another indication of how insignificant his name proved to be as a handicap was the fact that he was elected a county supervisor (1813-1816), state assemblyman (1816-1817) and US Congressman (1829-1831). He chose not to run for reelection to the House at the end of his first term and instead returned to his hometown where he helped champion the successful effort to incorporate Amsterdam as a village and was elected to serve as the second President of the Village Board of Trustees (aka Mayor).

He also followed in his parents’ footsteps as an able progenitor of the Arnold family name. He and his wife, the former Mary Bovee had twelve children. He effectively retired from all his business activities once he returned from Washington. Instead he became a philanthropist.

The Arnold home was said to have been one of the finest structures in the village. It was located on the west side of Market Street between Main and Division Streets, pretty much where the property of the now abandoned former Holiday Inn currently stands.

Amsterdam’s Benedict Arnold died on March 3, 1849 and is buried in the Arnold family plot in Amsterdam’s Green Hill Cemetery.

This native Amsterdam west-ender was also born on October 5.