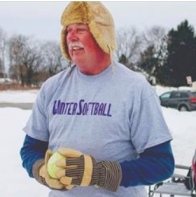 My brother gave him the nickname Scandor Akbar because the first time he met him he said he looked like a Viking. That was at a Shorty’s softball team’s practice back in the 1970s. A few years later, this lifelong resident of Amsterdam decided he wanted to own a bar and he renovated and reopened the old Pietro’s Tavern on Bridge Street, on Amsterdam’s South Side. He called it Scandor’s and it was truly this city’s first attempt at a sports bar. It quickly became an important part of Rug City nightlife. One of its most memorable features was the huge bar itself with hundreds of baseball, football and basketball cards entombed on its surface under layers of clear shellac. After he sold the place,” Nyle started his own lawn care business, which he still operates today. 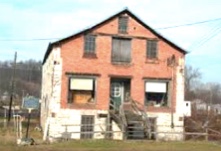 Almost twenty years ago, Nyle purchased a downtrodden building  that sits just off Bridge Street, on Amsterdam’s South Side. The Samuel Sweet Canal Store is a historic structure, which was built about 1847. It was originally constructed to serve as a forwarding warehouse for goods shipped to, from and through Amsterdam on the Erie Canal. It was added to the National Register of Historic Places in 1989.

Over the years Nyle gradually made improvements to the structure, all the while learning more about the history of the place. Many of his very impressed friends urged him to restore the Sweet building completely and open up a business there. In the early part of 2019 he decided to listen to those words of advice. He put a restoration proposal together which would turn it into a period tavern from the 1850s and applied for one of the grants to be included in Amsterdam’s Downtown Revitalization Initiative proposal for State funding. This summer, he was notified that his project had been approved by New York State. There are still a few steps to climb before the project can begin but if all goes well, we will all be able to travel 170 years back-in-time and drink hearty New York State-brewed IPA’s right here in Amsterdam.

I’ve known Nyle for close to fifty years and he is one of the most kind-hearted folks in the Amsterdam community. He’s served on the Amsterdam Industrial Development Agency Board and the City’s Recreation Commission. Over the years, he’s volunteered to play Santa Claus for scores of local charitable organizations and the Winter Softball game he helps organize annually has raised tens of thousands of dollars for worthy community causes. Happy Birthday Nyle!

This skilled Amsterdam builder was also born on September 21.