Answer to Question No. 1: The band’s name is Blood Sweat and Tears and their outstanding 1968 album entitled Blood Sweat & Tearswas one of my all-time favorites. It included three smash-hit singles, You Made Me So Very Happy, AndWhen I Dieand Spinning Wheel. Playing keyboards and providing backup vocals on all three of those classics was a guy who grew up in Troy, NY, whose parents moved to Amsterdam when he was in his twenties. His name was Dick Halliganand his father, Richard Halligan Sr. came to this city after accepting a position with Amsterdam’s Urban Renewal Industry. Dick Halligan was a brilliant musician and arranger, who started out as the trombonist for BS&T before taking over as th group’s keyboardist. In the above photo of the legendary group, Halligan is furthest to the left. 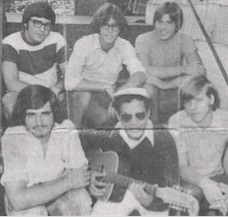 Answer to Question No. 2: The band called itself “Friend’s” and they all were. They appeared frequently at high school and community-sponsored dances and were always in contention in local Battle of the Bands competitions. Front row (from l to r): Mike Furman-bass; Louis Velez – lead singer who went on to a multi year run in a Las Vegas tribute known as the “Rat Pack”, in which Velez did a brilliant job impersonating Sammy Davis Jr; Ron Knapik – guitar. Back row: Pat Ilnicki – keyboard; John Chiara – drums; Mike Ilnicki – Guitar.

Answer to Question No. 3: The Dynamics– the members of this bandwere  all a bit older than me but I remember each well. Bob Belive was an amazing percussionist whose renditions of “Wipeout” were jaw-dropping. I don’t think there ever has been an Amsterdam family any more musically talented than the Ryczek’s. Bruce Morrow would later become part of a popular local band called Time Piece.


Answer to Question No. 4: The Suspect’s– This talented foursome have to be rated as one of the more successful local bands ever when you consider that in addition to having their video make an MTV broadcast their Album entitled “No Biggies” (pictured at left) sold decently over in Japan. Take a listen to just how good they were via the YouTube link above.
Answer to Question No. 5: Alex Torres y Los Reyes Latinos – Back in 1980, though there were plenty of Latinos living in Amsterdam, very few of them were musicians so when Alex Torres decided to create his first band here in the the city he needed to become a music teacher. He introducied some of his neighborhood friends to the music and musical instruments needed to evolve into a Latino band. And when he couldn’t find fellow Latinos he called on some of his Anglo friends to join his group. They started practicing their instruments individually and then jamming and rehearsing together as a group from the time they got out of school till they had to get home for dinner. In addition to keeping them off the streets and out of trouble, they started sounding pretty good. Use the YouTube link provided above to see what I mean.

Answer to Question No. 6: The Tony Brooks Orchestra– Tony Brooks’ tenure as one of Amsterdam’s busiest and most popular musicians began right before World War II and continued into the 1970s. He was the Amsterdam version of Tommy Dorsey. He played a mean trumpet and led a 16-piece ensemble that produced a big band sound, which was featured at all the biggest local events plus toured throughout the entire upstate region. His musicians included Frank Intilli, Zeke Romelski, Marty Dybas, Ray Iwanski, Hermie Bianco, Johnny Carbone, Jerry Ciulick, Chick Martuscello and Marty Fontana. Brooks also ran a popular music store in downtown Amsterdam near the corner of Market and Main for a while.

Answer to Question No. 7: Society – This band could have been called the Bishop Scully House Bandbecause they played so many dances at the upper Church Street school. Ironically, all were students at AHS. I remember Tim Moran was also a gifted tennis player in high school and Mark Descoteaux, a very good baseball player. Dennis Geib was a Guy Park Avenue Elementary alum who now lives in Georgia. Dave Phillis and Steve Hall were both nice people and both still live in the area. Do you think these guys still own those Nehru jackets?

Answer to Question No. 8: Tony’s Polka Band – This gifted ensemble got together as high school students in the 1990s and committed themselves to carrying polka music into the Twenty First Century. The foundation of the band is Amsterdam’s talented Banewicz family. They’ve put together a playlist of traditional and modern sounds that blends polka with country, rock, pop, Latin and even disco and performed it at venues throughout the northeast, winning a major national polka competition in the process. Do yourself a favor and Google this group and check out their discography. 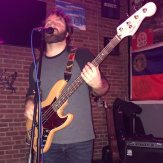 Answer to Question No. 9: Eric Anthony Neuls is his name. He is the son of Angela and Eric Neuls. He is also the great grandson of Anthony and Ana Fischetti, who used to be the proprietors of the original Tony’s Tavern and I guarantee if that wonderful couple were still alive and in business today Tony’s would be featuring live music on Friday and Saturday nights!

Answer to Question No. 10: That would be Dan DeRossi, the long-time GASD Board Member who is standing on the far right in the back row of the accompanying photo next to his baby brother Claude. Other members included Ray Ardizzone, Joe Auriemma, and Bill Machold. The highlight of the Continental Five’s long run was an appearance of the Jerry Lewis Muscular Dystrophy Telethon.

Answer to Question No. 11: The Maze– These four Class of 1971 Amsterdam High School alums were another of the very popular Amsterdam rock bands who provided the entertainment for many a school and Columbian Club dance back in the sixties. The accompanying photo found on Facebook shows Maze members (l to r) Tom Vidulich, Cliff Selbert, Eric Miller and Jeff Finkle being interviewed by emcee Hank Brown (center) during the band’s 1968 appearance on Twist-A-Rama, a then popular teen music show produced for WKTV in Utica, NY. These guys still try to get together and jam at least once a year. 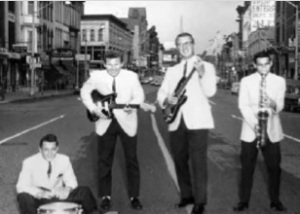 Answer to Question No. 12: Formed in 1963, by the late Amsterdam attorney, Norb Sherbunt, “the Daiquiri’s” included Amsterdam natives Sal Perillo on sax, Bob Olbrycht on drums along with Sherbunt and Bob Dietrich on guitar. When Dietrich left the group to join the military, Eddie Emmerich replaced him. They specialized in the early sixties rock sound and played all of the Amsterdam and Gloversville night spots that used to populate our area back then. Their biggest booking was up at Warren County’s Glen Lake Casino in the summer of 1965 and they also played a lot of frat and sorority dances on college campuses throughout the northeast. The group disbanded in 1969. 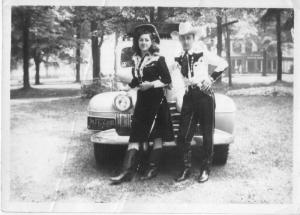 Answer to Question No. 13: For over fifty years, Elmer Rossi, a.k.a. Dusty Miller was the Rug City version of singing Cowboy. He and his band called the Colorado Wranglers even once performed in the Grand Ol Opry and he had his own highly rated (in Amsterdam) radio show on WCSS. And for many of those years him and the Wranglers were one of the most in-demand, live country & western musical acts not just in Amsterdam but also the Capital District, northern New York State and Vermont.

Answer to Question No. 14: His name was Pat Andrzejewski and he was the Guardian Angel of Amsterdam’s musicians for close to thirty years until kidney disease claimed him in 2007, while still in his early fifties. He was the go-to guy for anything a band needed from instruments, to lessons, to music, to gig opportunities, to finding a replacement for a sick drummer. But his greatest gift to this town’s musicians was his constant encouragement to play, practice, and play some more. He turned that Hilton space up on the second floor of the Amsterdam mall into a Mecca for  Amsterdam bands and speaking of bands, he played in a pretty good one himself. The group was called Leveticus and it featured Pat on bass along with Tom Bonafede, Mark Putorti and Bobby Boyer. I found the accompanying illustration of Pat on Facebook. Credit for drawing it goes to Casy Boyd. 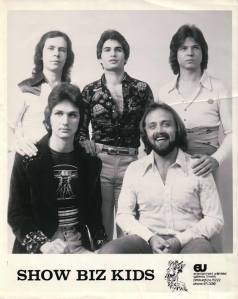 Answer to Question No. 15: The Show Biz Kids– The photo in the question section of this quiz actually shows the the first  rendition of the “Show Biz Kids” band, which remained together from 1973-1974. with Bruce Gardner, Ron “JB Royce” Scarofile, Tom Spakoski, Mark Viscosi, Dave VanEpps and Gary Otis Staley. The second generation, shown in the accompanying photo of the band included Gardner, Spakoski, Otis Staley, Robert Moragno and Chris “Doc” Orloff. Gardner also played with a group called Hitchcock Railway and another that called themselves Star Street.

Answer to Question No. 16: His name is Joey Thomasand the name of his outstanding ensemble isThe Joey Thomas Big Band. I heard this group play at the 2018 Amsterdam Italiafest and they were absolutely terrific. Thomas directs the sixteen piece ensemble and also plays the sax. The band also carries featured vocalists.

Answer to Question No. 17:This talented drummer’s name was Warder “Snuggy” Steward and he played drums for an Amsterdam band known as “Collector’s Item”. It’s impossible to think of Snuggy and not see him playing drums. Whenever I hear the Marching Ram drum cadence I think of Snuggy with that ornate hat cocked at a weird angle on his head, setting the proud tone of a proud group of musicians. And even folks who hated school dances attended the ones at which “Collector’s Item” played because they didn’t want to miss the chance to hear him and see him play on a full set of drums. 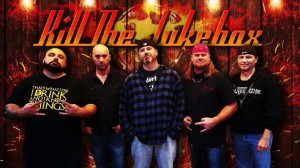 Answer to Question No. 18:The name of this modern day rock band is “Kill the Jukebox“.

Answer to Question No. 19: Not only were the “Bel Aires” one of Amsterdam’s most popular bands, this group was also one of the longest lasting performing acts in our city’s history, booking gigs for over a half-century, most recently appearing regularly at the Hotel Broadalbin just five years ago. Ed Mikenas from the original Bel Airs went on to play with some very famous groups including Jay and The Americans and The Skitch Henderson orchestra.  The ’45 record “All the Time” (flip side “As You Go”) shown in the accompanying photo was released by the Belairs in the late 1960’s and is certainly a treasured keepsake for longtime Amsterdam fans.

Answer to Question No. 20: a) Art Hoefs (see accompanying photo) – had to be one of the busiest guys in town during the years he worked as Sports Editor of the Amsterdam Evening Recorder newspaper while also appearing with various local bands as a drummer. b)Deanie Dale played trumpet and often used Hoefs as his very popular trio’s percussionist. Hoefs in turn hired Dale to author a popular horseracing handicap column for the Recorder. c) Paul Carbone played guitar and his combo, known as the New Yorker’s, were a very popular musical attraction in this city’s hotels and lounges back in the 1950’s. d) Alex Amendola played the piano at night and sold insurance during the day until he opened his own music store on the corner of Amsterdam’s Division and Bayard Street’s, in the old Lindsay, Lindsay & Palmer Pharmacy building, which still stands on that spot. e) Steve Lopuch played the fiddle for a C&W radio band called Pals of the Saddle. f) Curly Dean played the accordion in the Bob’s Tavern house group known as the Bob’s Men. 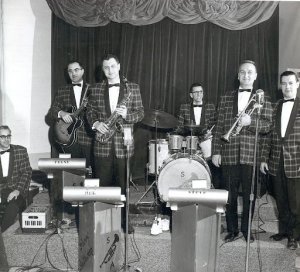 2 thoughts on “Answers to Amsterdam, NY “Battle of the Bands” Trivia Quiz”