Answer to Question No. 1: Which of the following individuals never lived in the Market Hill home pictured above?

Answer to Question No. 2: In what year did the Arnold Avenue Elementary School close?:

The school closed in 1964 after all students were transferred to the new Raphael J. McNulty School, which opened that year.

Answer to Question No. 3: In 1964, Pat Topping became the last winner of the Amsterdam portion of this nationally sanctioned competition, which was held annually on Lindbergh Avenue. Which competition was that?

Answer to Question No. 4: When Sammy Fariello suffered a debilitating stroke in the late 1970’s his son took over the running of his legendary Confectionary at 43 Lincoln Ave. Do you remember his son’s first name and his popular nickname?

Sammy Fariello’s son’s name was “Robert” but he was widely known by his nickname “Fadge”. Fadge kept the iconic business moving forward after his father’s stroke until he was tragically felled by a brain tumor in late 1985.

Answer to Question No. 5: Eighteen-year-old Amsterdam resident Harvey Plantz was tragically killed when his out-of-control vehicle careened down an icy Market Street Hill in February of 1888 and struck a lamp post. Which of the following vehicles would you guess Plantz was riding on at the time of the accident?

c) A bob sled – Young Plantz was a member of the Amsterdam Coasting Association, and was one of the twelve men riding on a 26-foot, 1,600 pound 12-man bobsled in Amsterdam’s 1888 Winter Bobsledding Carnival.

Answer to Question No. 6: Before the Route 30 arterial project was completed in the late 1960’s, the intersection of Market St. and Shuler St. formed a V-shaped piece of land on which rested the landmark structure pictured above. Are you old enough to remember the nickname of this landmark building?

It was called the Flat-Iron Building

Answer to Question No. 7: What were the names of the husband and wife team that used to own and run Mac’s Confectionary on Amsterdam’s Glen Avenue?

Mac’s Confectionary was owned and managed by Mac & Virginia Riano.

Answer to Question No. 8: Long before this family’s bakery relocated to Market Hill, it introduced the doughnut to sweet-toothed Amsterdamians. Which family was that?

Answer to Question No. 9: Dave Blinsinger, the very popular head butcher at the original Joe’s Market on Market Street was known by a very popular nickname. Do you remember what customers and the Market’s staff used to call Blinsinger back then?

The nickname of Joe’s legendary meat cutter was “Dynamite”. 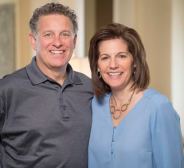 Answer to Question No. 10: The lady pictured above is currently serving as a U.S. Senator representing the state of Nevada. Her husband is a former U.S. Secret Service agent who grew up in a home on upper Market Street. Who is her husband?

Her name is Senator Catherine Cortez Masto and she is pictured above with her husband, Amsterdam native Paul Masto, who as a U.S. Secret Service agent was assigned to the detail that protected then President Bill Clinton. Paul was named after his Dad, who was one of Amsterdam’s most gifted photographers.

Answer to Question No. 11: A Market Street native who grew up at 180 Market Street was one of the writers who made the the irreverent pair of cartoon characters pictured above two of the most popular animated figures in history. Who is this writer?

His name is Chris Marcil (pictured above). He graduated from Bishop Scully High School in 1981. He would eventually team up with Sam Johnson, his college roommate at Yale University to form one of the most successful writing teams in the entertainment industry. They started off doing independent writing assignments for magazines like New Yorker and Mademoiselle and served a stint as editors at National Lampoon. The two joined the writing staff of the groundbreaking Beavis and Butt-head series in 1992. That success got them hired as story editors for the hit TV comedy News Radio, eventually becoming co-executive producers of that show. Next came Frasier and the pair’s first two Emmy Nominations for Outstanding Comedy Series. Their most recent success was the TV Land Network half hour comedy, Hot in Cleveland, which starred the ageless Betty White. Marcil now lives in California.

Answer to Question No. 12: Before the Pakenas family opened a dry cleaning business at 110 Brookside Avenue in the mid 1940’s, Elmer Welch ran his own very popular business at that location. Any idea what sort of business Welch operated?

Before Pakenas Cleaners took over the  building it was the home of Welch’s Bottling Works which bottled and distributed a robust line of soda flavors under their own “American Boy” Label.

Answer to Question No. 13: The handsome home pictured above is located on Beacon Ave. just off of upper Market Street. It was once the residence of a long-time Mayor of Amsterdam. What was his name?

His name was Arthur Carter (shown here) and he ran for mayor more times (9) and served more terms (5) than any other Mayor in Amsterdam history.

Answer to Question No. 14: The first rendition of this annual get-together took place in 1981 in the form of a stag party for Market-Hill native Tim Kelly (the guy standing on the far right in the above photo). Attendees had such a good time that day in Shuttleworth Park that they decided to make it an annual event for all the folks who grew up or hung out on Market Hill. Over three decades later it is still going strong! What is the name of this annual get-together?

It was christened the Hill-Hoods Reunion by Tim Blanchfield, a close friend of Kelly’s and himself a Market Hill native.

Answer to Question No. 15: In addition to being one of the most all-time popular lunch and after-school destinations for Amsterdam High School students, Dan’s Coffee House on Chestnut Street served a trademark tuna fish sandwich to which patrons loved to add an unconventional topping. What was that topping?

Answer to Question No. 16:Though it was the late pharmacist Donald Tesiero who was most closely associated with the iconic Market St. pharmacy pictured above, the business was actually started by the stepfather of Donald’s wife, Janet. What was his last name?

Ironically the last name of the original owner was also Tesiero! Thomas R. Tesiero opened the pharmacy in the 1920’s. It was one of three drugstores he operated in Amsterdam. In 1950, he married Martha Reinhart who had three grown children from a previous marriage. One of this children was a daughter named Janet Long. Janet ended up marrying Donald Tesiero who was Tom Tesiero’s nephew and also a pharmacist. The couple started running the Market Hill pharmacy for Tom R. in 1953 and took over ownership after he died in 1966.

Answer to Question No. 17: The one and only firehouse on Market Hill opened in 1907 at the corner of Chestnut and Bunn Streets and remained in operation till the mid 1970’s, when centralization brought all of Amsterdam’s firefighting resources to the new Public Safety Building. Every neighborhood firehouse used to have a number assigned to it. What number was this Market Hill fire house assigned?

The firehouse was designated No. 4 by the Amsterdam Fire department.

Answer to Question No. 18: Pictured above is long-time Market Hill resident James Ziskin who used to work behind the counter at Fariello’s Confectionary as a teenager and was recently voted into the Greater Amsterdam High School Hall of Fame. Though he did make an outstanding Hot Fudge Sundae, that was not the reason he was so honored. What has Ziskin done to achieve not just local but also nationwide acclaim?

James Ziskin is the author of an award-winning, best-selling series of fictional novels called the Ellie Stone Mysteries. There are now six books in the series, a phenomenal accomplishment by another very talented product of Amsterdam’s Market Hill neighborhood.

Answer to Question No. 19: The guy pictured above has deservingly become the most famous former resident of Market Hill but Dr. Tom Catena was not the first member of his family to become well known in the neighborhood. That honor belongs to his great grandfather on his Mom’s side. What was his last name and what did he do for a living?

Dr. Catena’s great grandfather was Joseph Aulisi who left his family in Loviano, Italy to come to Amsterdam in the first decade of the 20th Century and open a shoemaker shop which operated out of a storefront at 125 Market St. The photo at left shows that location next to the Joe’s Market building, as it appears today. The basement storefront served as Joseph’s shoe shop and he raised his family in the home above it.Two of the shoemaker’s son’s, including Dr. Catena’s grandfather, Felix J. Aulisi grew up to become New York State Supreme Court Justices.

Answer to Question No. 20: The home and studio of the artist who created the painting above still stands on Arnold Avenue. Who is this artist?

Her name was Mary Van der Veer. She was a talented enough painter to have studied under Whistler in Paris and have her canvased creations win medals and be chosen for expositions and exhibits all around the country and the world. But what could never be seen when you looked at one of her beautiful landscapes or portraits was the woman with deformed hands and back, whose atrophied legs were paralyzed by a severe case of infantile paralysis when she was just three years old.